Packing is well-underway and we’re now less than 24 hours from lift-off to London. We’ve checked in for our flight (isn’t it great how we can load our boarding passes into our mobiles? I just LOVE that.), and we’re taking care of this ‘n that. Have to be up at 5:00 AM tomorrow to get ourselves out to the airport. But it’s great to be able to take an AM flight to London so that we arrive in the evening, have a light dinner, hit the sheets and then hit the streets first thing on Saturday (our only day there, as it turns out).

Speaking of which, remember how I said that we’re going to be in London for only about 36 hours before motoring to Southampton to board Queen Mary 2? And that our “dance card” is full, as they say? I thought it might be interesting to share our London itinerary with you for Saturday. Here goes:

Following a lovely (and included) breakfast at the Shangri-La at the Shard (courtesy of AmEx FHR Program) here’s how our day unfolds:

11:00 AM – We’re off and running to the National Portrait Gallery to see the “Audrey Hepburn: Portraits of an Icon” exhibit. For those of you who might be able to make it, the exhibit is on until October 18th.

After a leisurely stroll through the exhibit, we’re hoping to have time to drop by Anya Hindmarch (the bespoke store only a stone’s throw from Harrods), where we did some shopping last May. I needed a new travel portfolio (long story short: we got the referral from the Concierge at the Peninsula Hotel in Paris, and he was SO right), and got a beautiful one there. This store is amazing, even just to walk through to see their merchandise.

1:30 PM – Lunch back at the hotel – Ting – with our dear friends, Lynne & Garry. They are a lovely couple we’ve sailed with aboard the Crystal ships on several occasions. We have so much fun with them and it’s always a pleasure to be in their company. 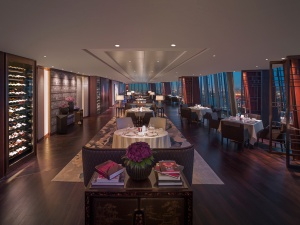 Ting at the Shangri-La

From last May aboard Crystal Serenity

6:30 – Pre-Theatre cocktails at the Corinthia. The Bassoon Bar there is a must. I mentioned the other day that we’ve stayed at that property several times over the past few years. The hotel is perfectly placed: just 5 minutes from Trafalgar Square and the Strand and, in just a few minutes more, you’re on the West End. The bar is very snazzy. Last time we were there, the manager (who always makes sure we have a really good time), waltzed over to our table, and said (in a very low tone of voice): “Don’t look, but to your left – – – – – OPRAH!” And indeed, there she was.

The Bassoon Bar at the Corinthia

7:30 PM – Farinelli and the King, now in previews at the Duke of York’s Theatre. This is the West End engagement of a production which started at Shakespeare’s Globe and stars Mark Rylance as King Philip V of Spain. Mark Rylance is such a sensation that tickets to this production are impossible to obtain. I tried for months before getting lucky. (Persistance pays off.) This play is a cinch to transfer to Broadway, so keep an eye out for it.

Mark Rylance in Farinelli and the King

CULTURE TIP:  Farinelli and the King

10:15 PM – Post supper at The Ivy. Who doesn’t love the Ivy, I ask? It’s been around for over 30 years and never fails to impress. The place closed down earlier this year for a complete renovation and we were there last Spring for its soft opening. The place is gorgeous, the service impeccable, and the food delicious, whether you’re enjoying a burger, a steak, or fish ‘n chips. I’d say it’s the go-to place in London for your post-theatre supper. And you never know who’s going to turn up. We’ll never forget the night many years ago when Princess Margaret was two tables away and having a “really good time”. Then there’s the time in 2012 when AAC CPA and I were shown to our table, and who turned up at the next table but the cast of Sweeney Todd, which we’d just seen. The Ivy is a place you should try at least once.

AAC enjoys his fish and chips at the Ivy

The Ivy refurbished and renewed

And that’s our planned whirlwind day in London on Saturday. I figured that I should post it now as I may not have time when we’re actually there and doing it.

Bon voyage to us?