AAC CPA and I are back on terra firma and again ensconced  at the Ritz-Carlton in Fort Lauderdale where we began this adventure 8 days ago. We disembarked Celebrity Silhouette early this morning (around 8:00 AM) and were in checked-in at the hotel and unpacked by 9:15. How’s that for good travel karma?

(We heard from a fellow passenger – who wasn’t able to disembark as early as we – that disembarkation had a bit of an immigration kerfuffle and everything stopped mid-morning, and he and his party were delayed from getting off the ship for quite some time. No fun, that.)

Since I haven’t posted for a couple of days, I should tell you that the remainder of our cruise was quite lovely. Today’s post will be, mostly, about all the food we consumed. For Friday lunch, we ate at Murano, arguably the best table on the high seas and certainly the best restaurant on the ship. I wasn’t hungry (of course), so I had 2 appetizers: a crab salad, followed by a risotto, both of which were deeeelicious.

Porcini and Morel Risotto peaking through a truffle foam

Then we may have made a tactical error: we were invited to (and attended) a special Champagne Tea on Friday afternoon. Did we really need all those tea sandwiches, scones and pastries? Not really, but we cut back to save ourselves and our waistlines – we cut the tea.

On Friday night, we began our evening with cocktails back at the Molecular Bar, followed by dinner at Tuscan Grille, both of which were delightful although, for some unexplained reason, we had lost our appetites (which didn’t stop us from over-ordering, as usual). We had an amazing window table at the very back of the ship. 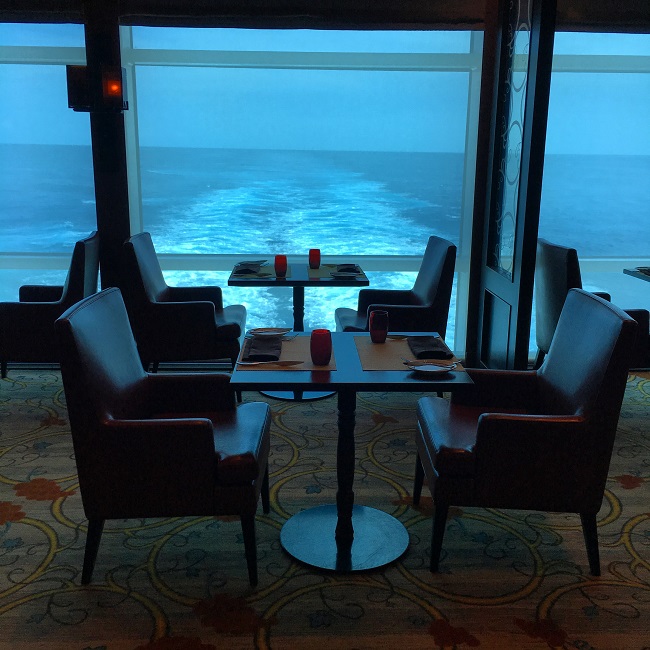 Our window table at Tuscan Grille (in the rear)

Tuscan Grille specializes in pastas and steaks and it didn’t disappoint. After sharing a Caprese and a “Chop Chop Italian Salad”, we split 2 pastas as a middle course: a fabulous Spaghetti alla Bolognese and Pappardella Alfredo con Aragosta (that’s lobster), which was dreamy. For the main, we split a grilled filet mignon and seafood skewers with Tuscan fries and Mediterranean vegetables as sides. No need for desserts.

Oh, and the holidays were getting closer and closer as every day something new appeared somewhere on the ship:

Saturday was the last day at sea and the last day of the cruise. The passengers seemed to move into high gear so as not to miss out on anything. It was very high voltage.

The “highlight” of the last day – if one can call it that – was the “Egg Drop Competition”, in which various teams built protective devices into which 2 raw eggs were placed. Said device was then dropped from the 7th floor of the ship’s atrium down to the 3rd floor. Their devices had to land within the target range (“x” marks the spot), at which point a designated team member had to extract the eggs which were, hopefully, intact (ie., no “egg casualties”). Then the assembled onlookers would rate each team on a scale of 1 – 5. Some of the voting was brutal and mean (schadenfreude, anyone?). Some of the devices were very clever, as were some of the team names: “Eggstacy”, “Great Eggspectations” “Eggsasperation” and so on. I have no pictures to post, as they would not do justice to the event.

After all that excitement, it was time to start packing. Yes, all good things must end. We had made arrangements to have a farewell gala dinner with our group at Murano. Because there were 8 of us, we were given the private “wine cellar” for our last supper. It was definitely the finest meal of the cruise and there was quite a bit of hilarity around the table as well. Some of what we had: 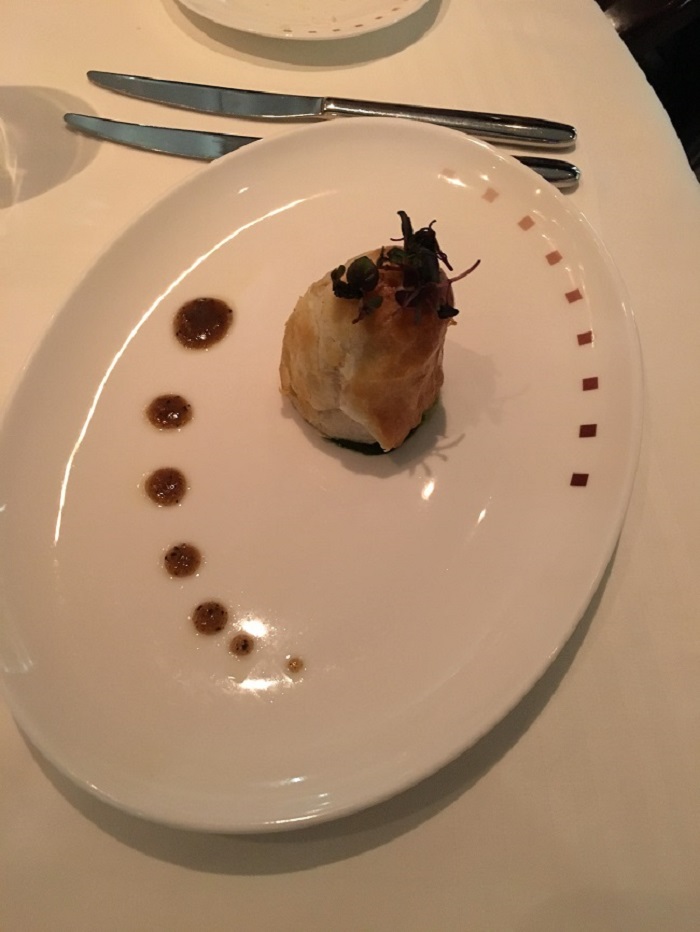 How about Diver Scallop Wellington Style to start the meal? 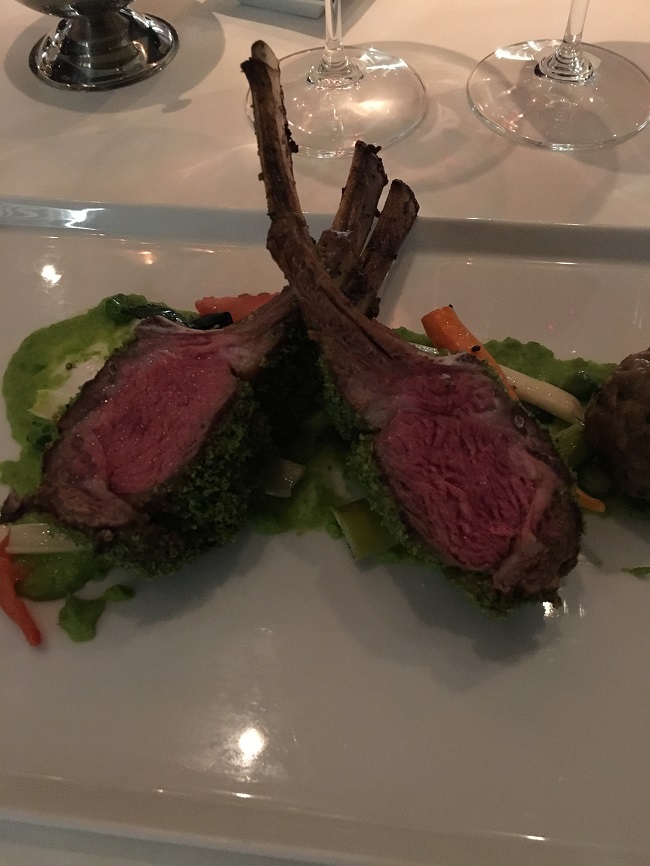 Oh, and followed by a cheese course, just ’cause (no pix, unfortunately, but we all know what it looks like).

Six shots for dessert for 2

Oh, and btw, remember that I was telling you about the over the moon pastries that were offered with breakfast every morning? Take a look: 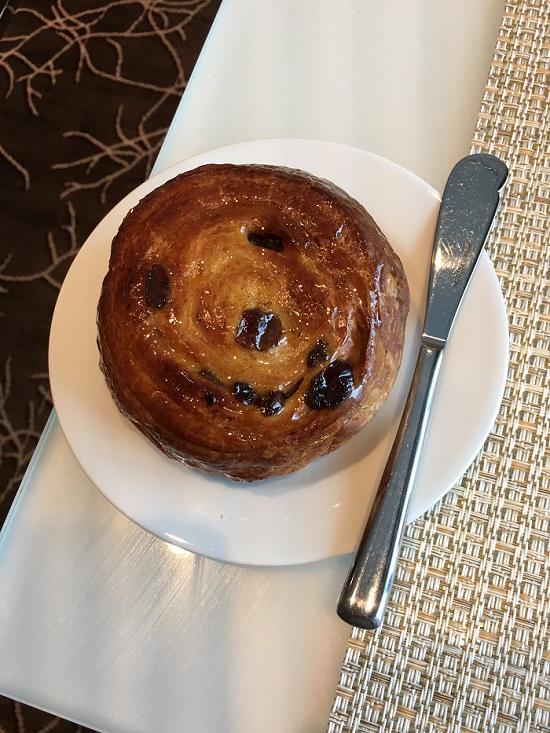 Here’s your Rorschach question for today: What do you see when you look into the pastry?

Next time, I’ll regale you with tales of our final 2 days in Fort Lauderdale before winging it back to lil’ ol’ New York City.