We’ve just come back from a sensational dinner at I Latina, but more about that later.

The day started with a delicious buffet breakfast at the hotel. So far, the weather has been warm and sunny – it’s summer down here, after all.

AAC CPA on the terrace for his first breakfast

A sampling of 1 of the 3 buffet stations 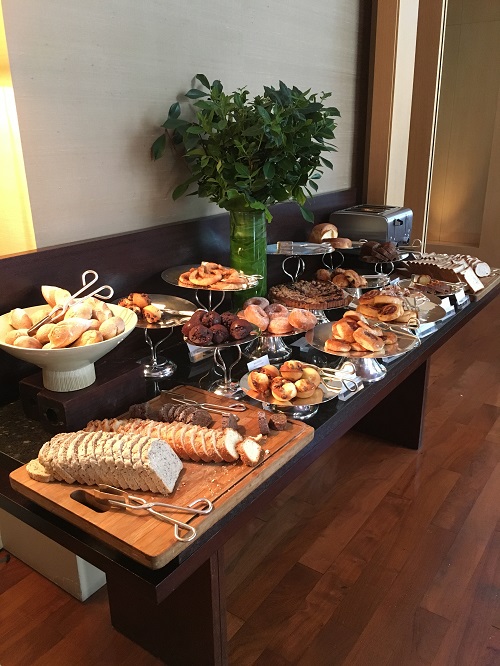 Today was our first opportunity to see this great city with our amazing guide, Pedro Werberg. Pedro is extremely personable and, also, knowledgeable about the history and geography of the city and we had the pleasure of spending many hours with him walking around the city and seeing the sights.

I can say – without reservation – that, if you’re planning a trip to Buenos Aires and want a professional private tour guide, Pedro is your man.

Here’s a photographic journal of a few of the sights we’ve seen so far:

We started by admiring some of the architecture of the city, much of which is heavily influenced by the French style of the 18th and 19th centuries:

This building was once a private residence! 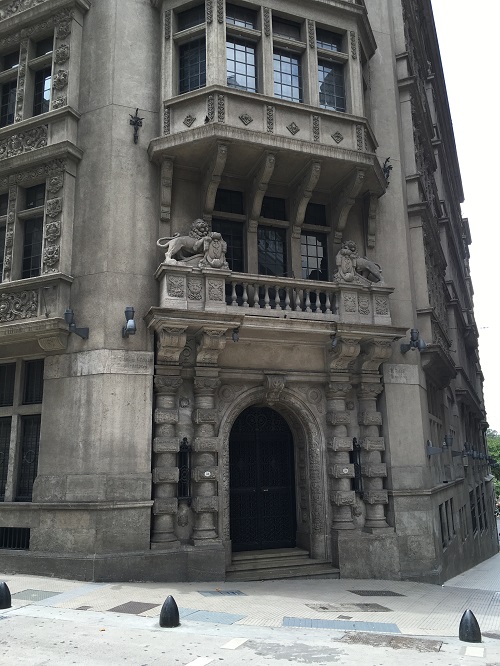 Another example of French-style architecture in Buenos Aires

On our way, I happened to see the following advertisement, which should please Harvey Fierstein quite a little bit:

Many of the sights we saw today were in honor of José de San Martín (1778-1850), an Argentine general who played a pivotal role in obtaining South America’s independence from Spain. As we walked our way through the city, San Martin was commemorated with, among other things: a park, a statue, a palace and, finally, his tomb in the cathedral, which is attended by an honor guard. San Martin was a true hero. 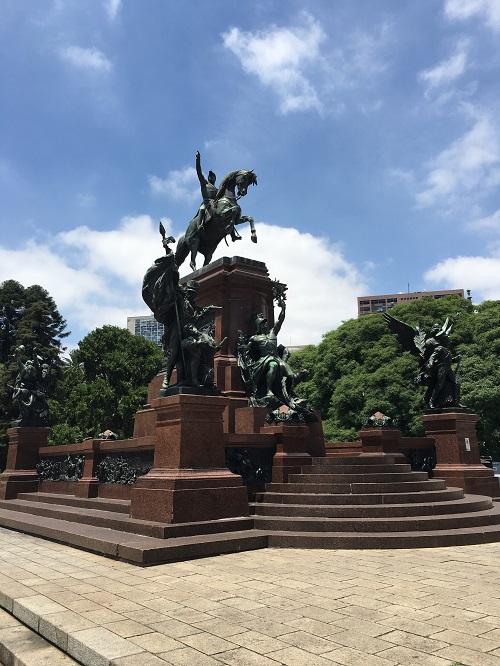 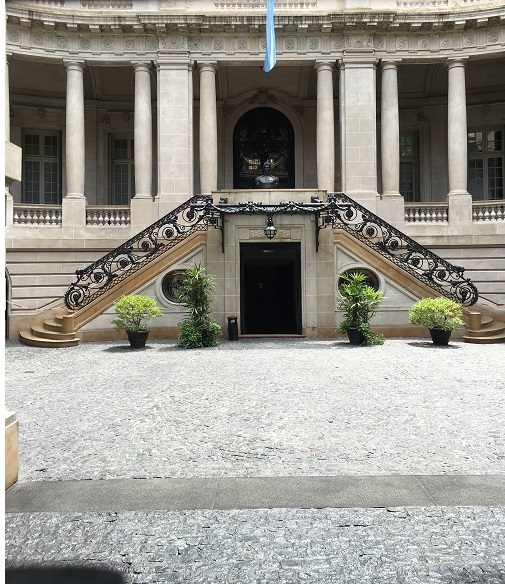 Tomb of San Martin inside the Metropolitan Cathedral

The gorgeous ceiling inside the tomb

Harrods – once upon a time, but not for many, many years

Along the way, we asked Pedro to help us change some US $ for some Argentine Pesos. Since the recent Argentine presidential election, the currency has stabilized greatly but exchanging money can still be just a bit confusing. Pedro found us the best place for the exchange, and we got a rate that was more favorable than I could find online, about 14 pesos to the dollar. And look what we found next to our money changer:

Then it was time for lunch. There’s a lovely area waterfront area called Puerto Madero, which consists of a very long row of British built brick buildings, converted into shops and restaurants. We found one of those restaurants – Happening – and had a delicious lunch on the terrace, accompanied by an excellent Malbec (of course). 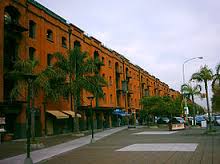 Happening – where we had lunch

The mirrored urinals at Happening – just thought you’d be interested

After lunch, we made our way to one of the most famous landmarks in the city, especially if you’re a Lord Webber fan: the Casa Rosada (Pink Palace). Two of the most famous people connected with Casa Rosada were former president, Juan Peron and his wife, Eva – you all know them, right? Pedro was really great in explaining the complicated history of this charismatic couple and the roles they played when they were in power. We also discussed many of the myths associated with this couple, even to this day. 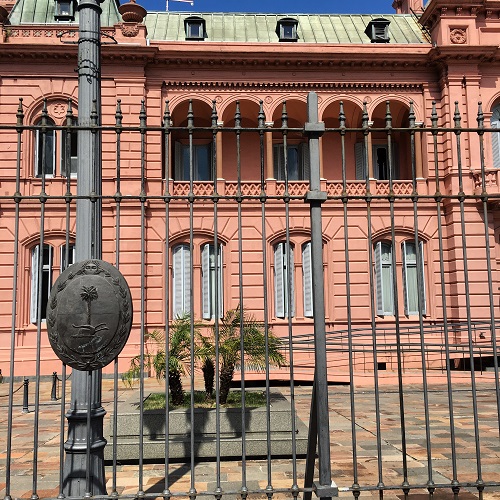 By then, it was time to return to the hotel for a little downtime and get ready to head out for a very memorable dinner at I Latina, which had been recommended to us by everyone we had asked where we should eat. It did not disappoint. 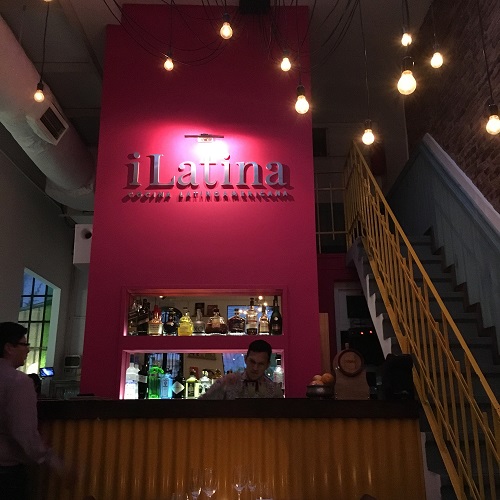 Arriving by taxi in a somewhat questionable neighborhood, we were confronted by a locked wrought-iron fence, through which we could see a very charming restaurant. Fortunately, we rang the bell and someone immediately came to escort us inside and to our table. It is a small-ish place, probably with no more than 20-25 tables.

There is a set menu, with optional wine pairings that can complement the meal. We elected to go all the way.

The food was inventive, sometimes playful, and absolutely delicious.

Our menu – part one

And, btw, I just wanted you all to know that our AAC CPA ate every bite of every course. He can sometimes be a – how to say it? – picky eater, but not at I Latina. If that isn’t a great review of a restaurant I don’t know what is.

I’d also like to mention the young staff, all of whom were wonderful, spoke excellent English and were incredibly friendly. A couple of them were from the US and their stories of how they wound up in BA were very interesting.

The service was completely professional, but not at all pretentious. It was almost as if you were in a friend’s home being served this fabulous feast. 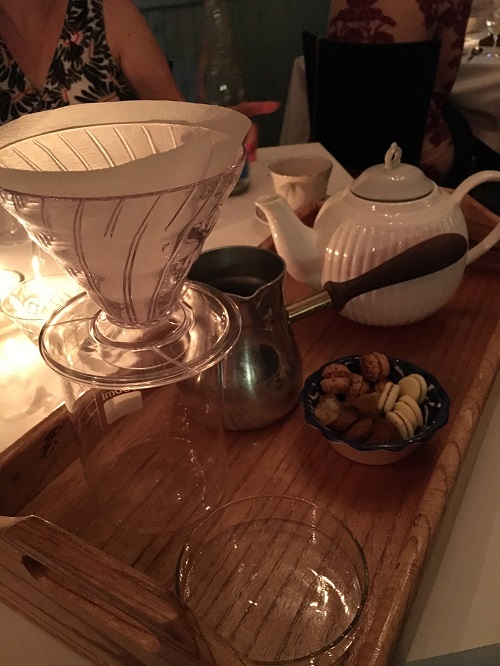 Wonderful infusion at the end of the meal 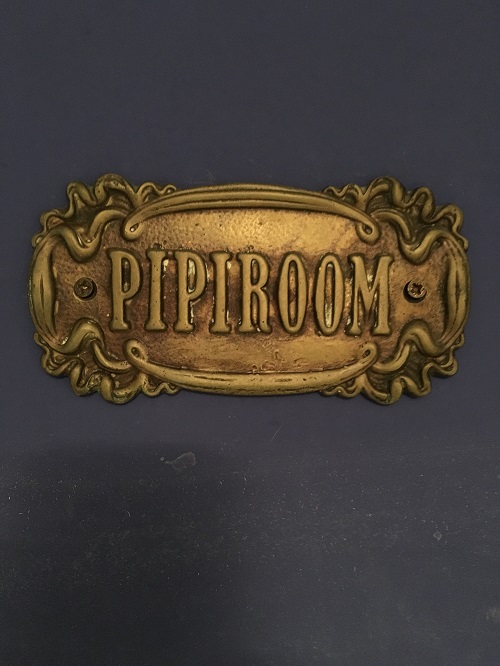 Our meal lasted almost 3 hours, at the end of which, our waiter arranged for a taxi to transport us back to the hotel, where we said a fond goodnight.

We’ll be up tomorrow for another day of sightseeing with Pedro.