Feeling very relaxed (nay, lazy) on this Wednesday afternoon as I begin this blog entry. It’s our first sea day, which is my favorite thing about being on a ship.

When last I wrote, we were in Doha, Qatar and I promised to tell you all about our all-too-brief visit. 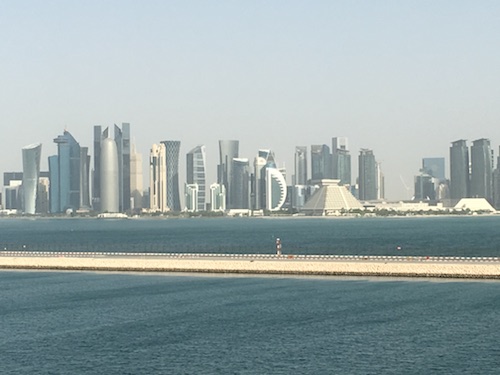 Good morning, Doha – as seen from our suite

Well, in about 2 words: not much. Qatar is another of these Gulf states that, like Dubai, is a very modern and covered with skyscrapers and in constant construction mode. Unlike Dubai, however, it’s not quite as exciting and, at least where we were, there were no sidewalks for walking.

The one thing we were interested in seeing was I.M. Pei’s Museum of Islamic Art. Unfortunately, it’s closed on Tuesdays – bad luck for us.

Before checking out the sights, AAC enjoys his first breakfast on board:

Having realized that the museum was not an option, we elected to go out for a nice lunch at Sridan, a restaurant within the Shangri-La Hotel. We’ve had the good fortune to visit several of the Shangri-La properties – in Tokyo, Paris and London – so we knew we’d be in for a good time.

As it turned out, the ship offered complimentary shuttle service to and from the City Center which, as it turned out, was a 3-minute walk to the Shangri-La. How convenient is that?

It was so convenient, in fact, that we didn’t feel the need to exchange our US dollars for the local currency in Qatar – the Dirham, the Qatari Riyal. We took a chance.

The Shangri-La in Doha is very much in keeping with their other properties around the world: Elegant, serene and very Zen. Upon entering their properties, you immediately sense a scent that is familiar to you, a nice touch. 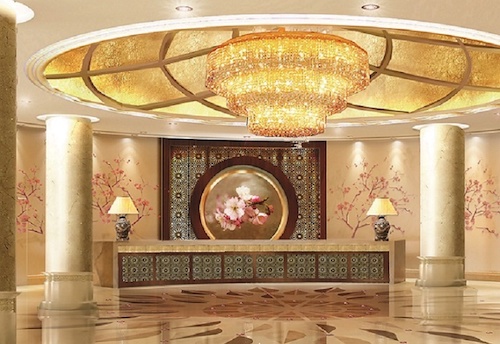 The lobby at the Shangri-La – spare and elegant

And look what else we found in the lobby:

Yes, falconry at the Shangri-La

You probably won’t notice it, but the falcon was wearing a Shangri-La cap on his cute little head.

We headed upstairs to Sridan, which offers a spectacular daily buffet. Just what we need – more food, right? 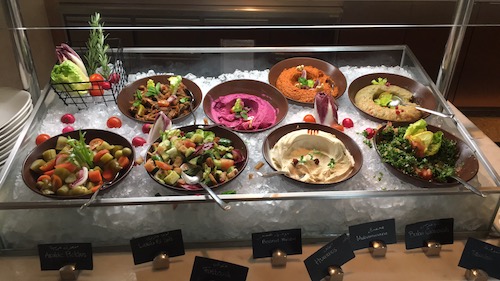 Although there were Italian and American stations (which we could get anywhere), we opted for made-to-order kebabs from the Indian station. Fancy place: you order what you want and it’s brought to your table.

Did we leave room for sweets? Not really

Finishing off the meal with Arabic coffee – a taste sensation

Following our lunch, we were ready to get back onto the shuttle and return to the ship.

There was one big highlight on our shuttle ride back to the ship:

We just lazed around on our terrace until it was time to sail at about 6:00 PM. 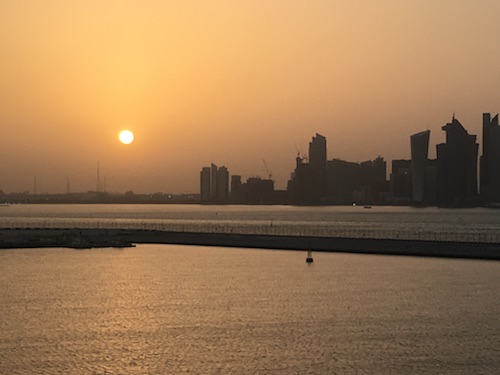 Another beautiful sunset as we sail out to sea

And then it was time to get ready for cocktails and dinner. On several nights during the voyage, the Colonnade – which usually offers a casual buffet dinner – transforms itself into another Thomas Keller venue, offering a 4-course set menu. The concept is exactly the same as Keller’s casual restaurant in Yountville, California, Ad Hoc. For these evenings, advance reservations are required. It’s a really good deal: at Ad Hoc, the cost of the meal would be around $55 – 60, plus wine; on Encore, it’s all included.

Before dinner, however, we returned to the bar adjacent to the Thomas Keller Grill, probably the most elegant bar on the ship. We made friends with superstar Bobby the night before, and he promised to dazzle us with his mixologist talent.

So last night, he prepared for me my very first Vesper (a/k/a the James Bond cocktail): Tanqeray 10, Ketel One, Lillet – iced up real well – stirred, never shaken. Poured into a Marie Antoinette glass and finished off with twist of lemon, it was a sight to behold. It was also an extremely potent libation. Kudos to Bobby!

AAC, CPA’s Campari/Soda and my 1st-ever Vesper – a taste sensation

After enjoying our cocktails and schmoozing with Bobby, we climbed one deck to Colonnade, aft on Deck 9. It was such a beautiful night, that we opted to dine al fresco at the very back of the ship. The entire outside ceiling area is covered for our protection from the elements. It was simply magical.

Immediately upon being seated, we were brought the most delicious fresh baked bread and a glass of delicate Chardonnay.

As I already mentioned, these evenings are conceived in the same way as Chef Keller’s restaurant Ad Hoc in Yountville.

Check out last night’s menu below:

Are you licking your lips and salivating now?

And then the food – with wine pairings – started to arrive:

(Note the size of the portions for just the 2 of us!)

Next up, the Hickory Smoked BBQ ribs with yummy sides

We were served a lovely Italian red to compliment the ribs. It did. 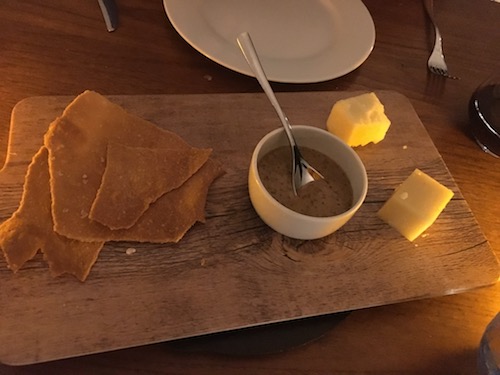 Potted cheesecake with poached blueberries – did we have room for same?

The meal, the service, the ambience of dining al fresco in a beautiful setting was totally intoxicating – the perfect evening, in fact.

After that, there was nothing left to do but stagger back to our cabin and fall into bed.

So here we are on our first sea day, with all kinds of various activities, should we want to partake.

One interesting side note is that we found this letter in our cabin this morning: 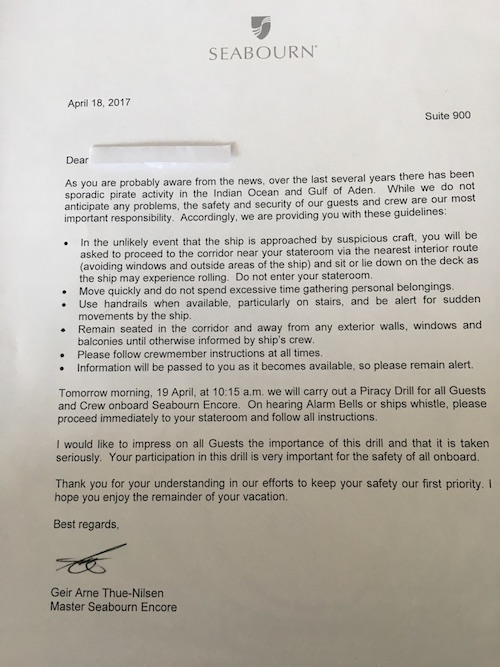 At noon we tried our hand at team trivia to see how stupid we can be – no comment.

Then lunch in the restaurant at the invitation of the head sommelier – he wants to discuss wine with us – we’re all in.

And then a duplicate bridge game to keep the little gray cells working.

One thought on “First Sea Day and Doha Recap”