Good morning and greetings as the beautiful Seabourn Encore approaches the harbor at Salalah, Oman. I’ve fallen behind on my blog entries, and I hope you’ll be generous about my laziness.

The not very picturesque entry into the port at Salalah, Oman

On Thursday, we had the great good fortune to visit Muscat. As you know, AAC, CPA and I are not big on group tours and usually prefer to go off exploring on our own. After talking it over with the outstanding and indispensable Guest Services Team aboard Encore, we decided to take the complimentary ship’s shuttle service into town and hire a taxi to squire us around. Interestingly, you haggle over the rate, which is exactly what we did, ending up with a young local and his somewhat dilapidated car. No matter: we were in for an adventure.

Our intrepid guide/driver, Medid with the equally intrepid AAC, CPA

There were 2 things that we wanted to see: the  Royal Opera House Muscat and, more importantly, the Sultan Qaboos Grand Mosque. It’s probably one of the most imposing structures in all of the Arab states. It certainly took our breath away. The Mosque is open daily to tourists, but only until 11:00 AM, so we made it our first stop.

A few facts about the construction of the Mosque: 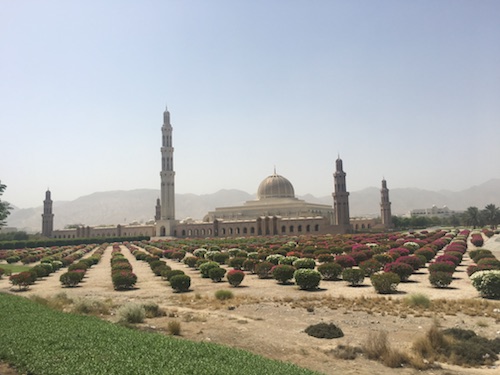 AAC, CPA shoeless and at the Mosque 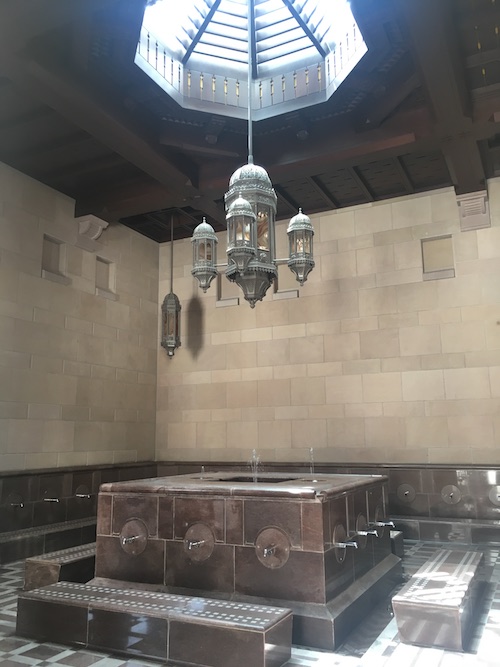 Before entering the Mosque, men come here for the ritual cleansing

AAC, CPA with one of the minarets in the background 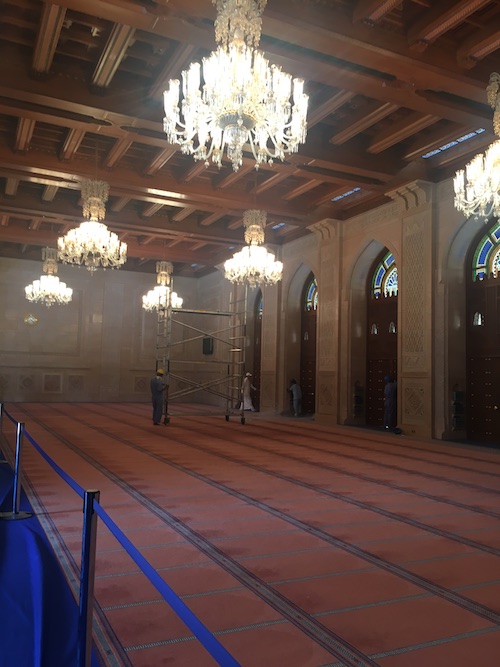 Another view of the private musalla 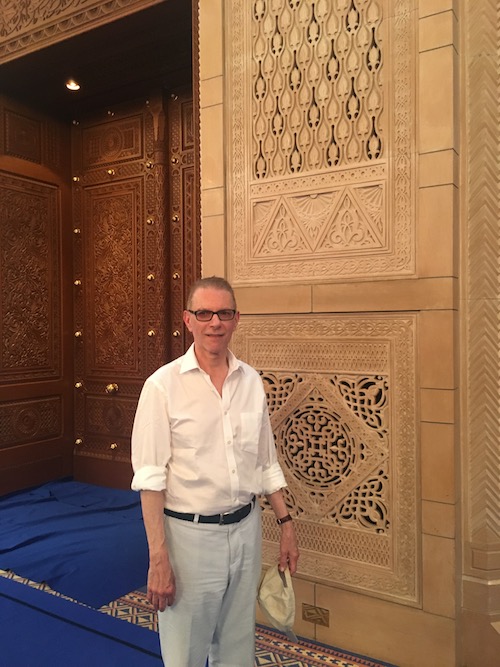 AAC, CPA inside the private musalla

AAC, CPA in a covered area between the private musalla and the main musalla 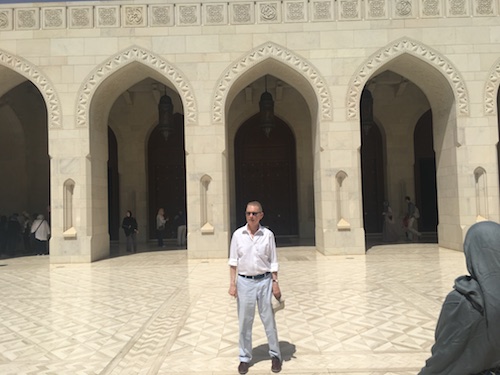 AAC, CPA outside the entrance to the main musalla

Inside the main musalla, which accommodates over 6,500 men at a time 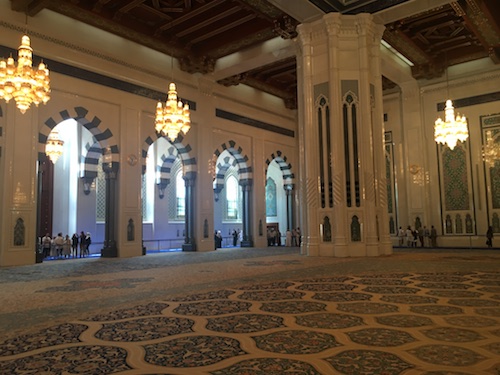 Another view of the main musalla 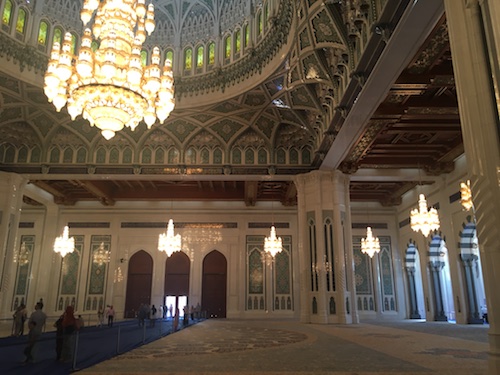 One more view of the main musalla 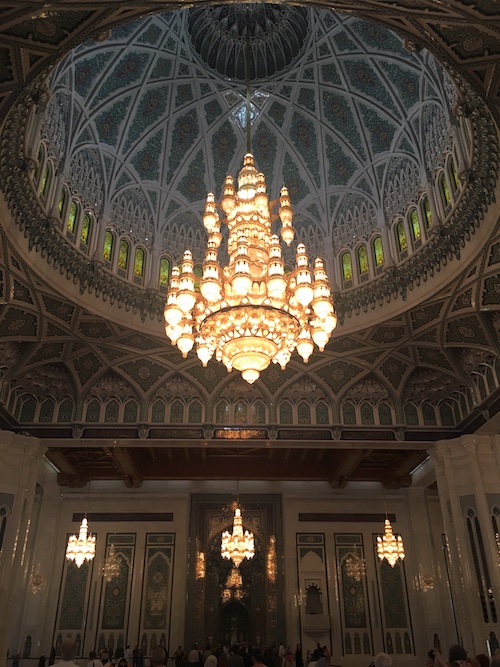 The main chandelier and dome inside the main musalla 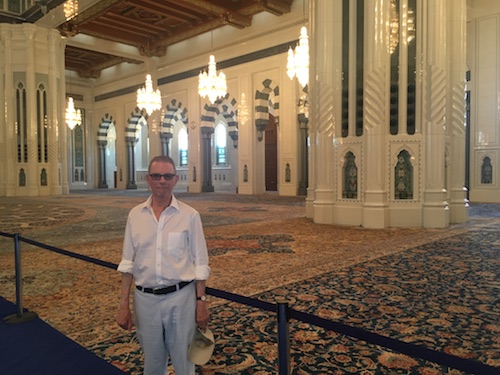 AAC, CPA inside the main musalla

Ornate stonework at the eastern wall of the main musalla

Suffice it to say that we were dazzled by visiting this famous mosque. Interestingly, nowhere in my research could I find any estimates of the cost to build it. I guess that, if you have to ask . . . . . . . .

From the mosque, we made a quick visit to the Royal Opera House Muscat, the only opera house in the Arab states. In 2001, the Sultan Qaboos – this guy has lots of sway and, obviously, lots of swag – determined that Muscat should have its own opera house. Ten years later, on October 11, 2001, the opera house gave its inaugural performance: Puccini’s Turandot, in a spectacular production designed and directed by Franco Zeffirelli (a production which had originally been seen at New York’s Metropolitan Opera). Legendary tenor/baritone/conductor, Placido Domingo, was on the podium for this performance. Needless to say, it was a big deal.

Unfortunately, there was an onstage rehearsal when we arrived, so it was not possible to go inside to see the auditorium.

AAC, CPA in front of the opera house

Spectacular production of Puccini’s Turandot at the Royal Opera House

Interestingly, just a few yards away stood a familiar sight:

And a really cool (as in beautifully air-conditioned) indoor cafe

Also attached to the opera house complex was a very upscale mall with several dozen high end stores and at least one restaurant. Our driver encouraged us to take a stroll, mostly to enjoy the air conditioning before we soldiered on.

From there, we drove to the Al Alam (Flag) Royal Palace, the ceremonial palace to the Sultan Qaboos. It’s quite a sprawling amalgam of buildings but here we are at the official entrance.

Entrance to the royal palace 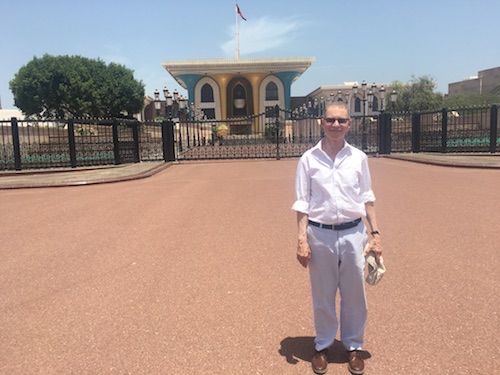 By then, it was time to think about returning to the ship – we’d visited what we most wanted to see, it was blazingly hot, and our time with Medid was running out. He dropped us off at City Center, where we hopped back onto the shuttle which would return us to the ship.

Encore as seen from City Center

Seabourn does it so well – when we returned to the ship, look what was awaiting us: 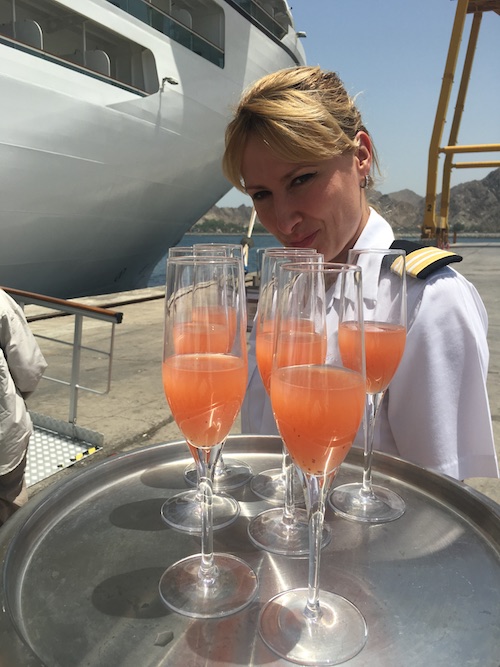 So, if you are fortunate enough to find yourself in Muscat, please do yourself a big favor and visit the Sultan Qaboos Grand Mosque – it is, without fail, the highlight of anything we’ve seen while we’ve been here. Imposing, beautifully designed, of great architectural value and an important religious landmark. Highly recommended.

Meanwhile, here we are in Salalah, Oman, our last port before 5 glorious sea days and then – SPOILER ALERT!! – Aqaba, Jordan, from which we’ll visit Wadi Rum and the lost city of Petra: for us, I think it’ll be the highlight of the cruise.

(Don’t tell anyone – shhhhh – but AAC, CPA and I are going to play hookey today and remain on the ship. I think, maybe a little room service – we’ll have club sandwiches and fries on our ginormous terrace – and just laze around all day.)

In the meantime, I’ll share some more stories with you about the amazing time we’re having on this very lovely ship, Encore.

2 thoughts on “Muscat, Oman: The Sultan Qaboos Grand Mosque (and other places of interest)”