Good morning and greetings from a gloomy, cool and wet London. Our first two days here were gorgeous, sunny and warm. Such is the weather in the UK, I suppose. But a little gloom and doom will not prevent us from having a marvelous time. 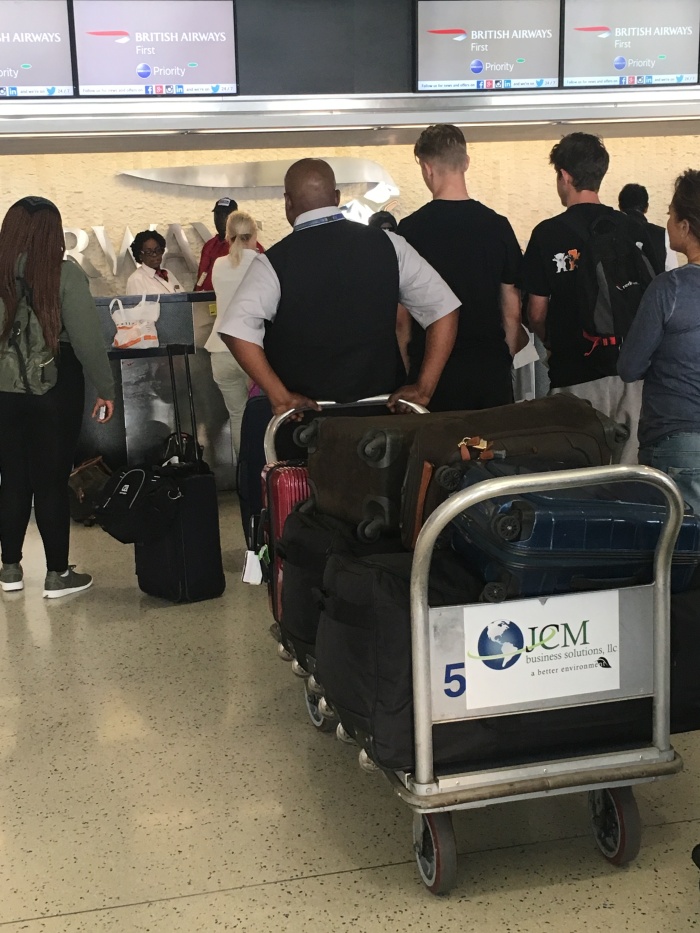 Check in at JFK was nasty and very slow. BA reports being “woefully understaffed”

Fortunately, once past check-in and security, the Concorde Room awaited, where we had a lovely pre-flight dinner.

Just as we finished dining, it was time to board our flight. Nothing much to report, except to say that BA took very good care of us. Once we reached cruising altitude, our beds were made and we drifted off for about 4 hours of sleep. Before landing, we enjoyed a hot breakfast to start the day.

Our flight arrived on time and, once past customs and baggage claim, we headed for the Heathrow Express, perhaps the best (and certainly fastest) way to get into London – it’s a 15 minute trip. And, by the way, you can get a nice discount if you book your trip online at least 30 days in advance of your travel date. 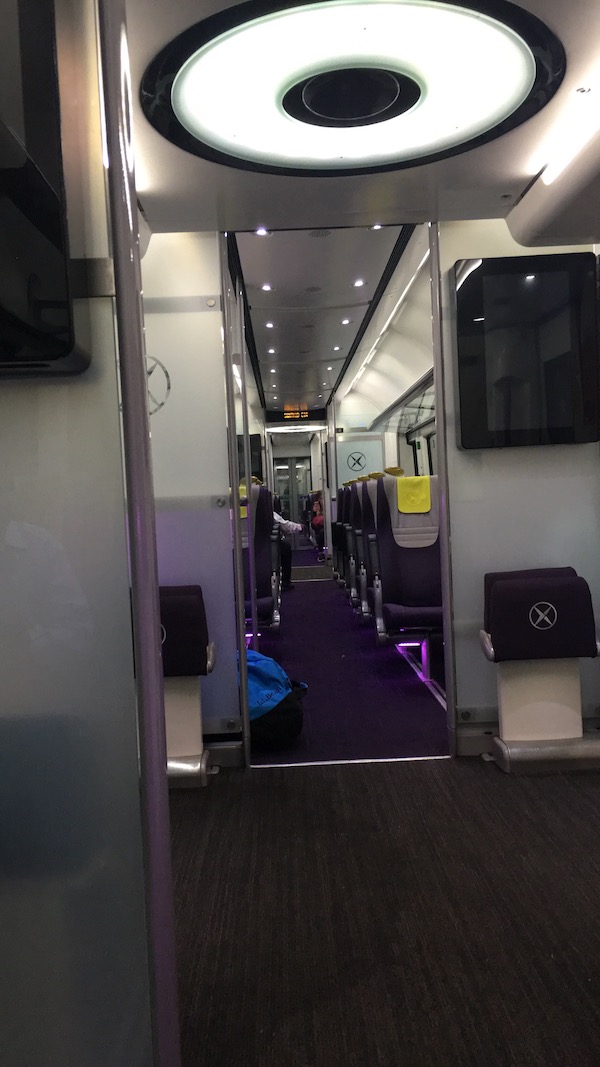 The Heathrow Express, comfortable and fast

The train dropped us off at Paddington Station and, from there, it was a quick 15 minute taxi ride to our hotel, the Shangri-La at the Shard, across the river and a stone’s throw from London Bridge. (Normally, the trip can take longer, but it was a bank holiday, so the streets were pretty empty.)

We arrived at the hotel at about 10:00 AM and, very fortunately for us, our room was available. Not only that but, because we had booked through the AmEx Fine Hotels and Resorts Program, we were given an upgrade to the Iconic City View Room, which has the best views in the hotel. Thanks, Veronica!! 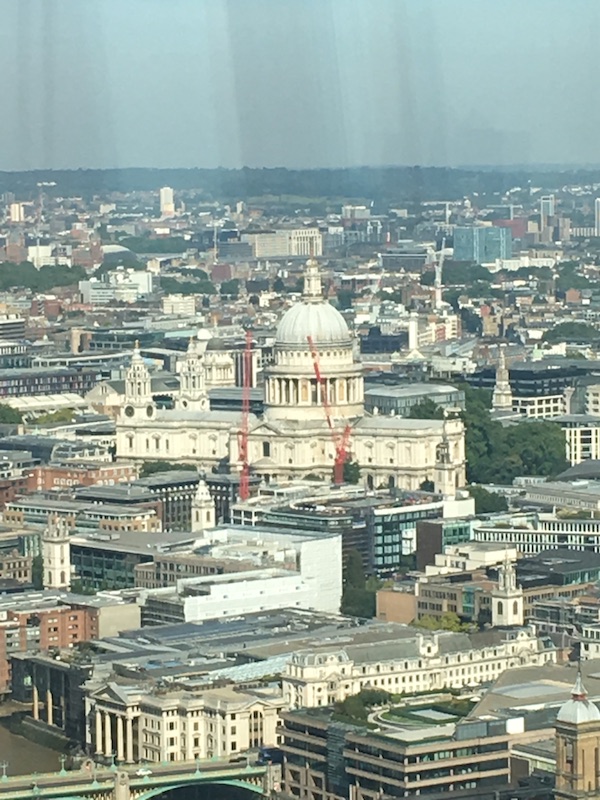 TRAVEL TIP: The Shangri-La at the Shard

Once we unpacked and got settled in, we decided to walk off the jet lag and grab a bite of lunch. Because we’re across the river from most (if not all) of the action, we took the tube over to  Leicester Square (in the heart of the West End), and started strolling. 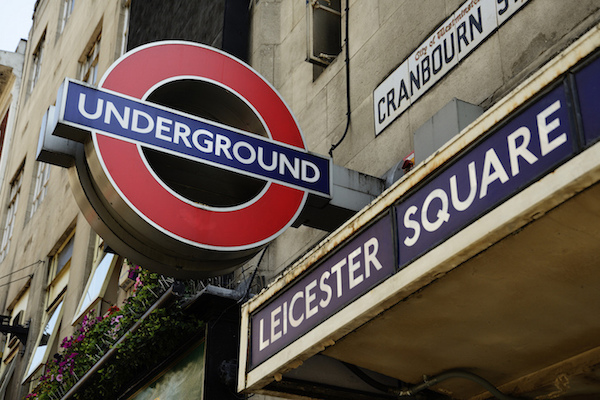 The tube delivered us to Leicester Square in the West End

From there, we walked through Trafalgar Square and over to Piccadilly.

Trafalgar Square on a beautiful Monday morning in August

By the time we made our way over to Piccadilly, we were feeling a bit peckish, so we decided to stop in at one of our favorite restaurants in London, The Wolseley.

A bit of history, courtesy of The Wolseley’s website: “In 1921, Wolseley Motors Limited commissioned the architect, William Curtis Green, to design a prestigious car showroom in London’s West End. He drew on Venetian and Florentine influences, as well as incorporating the Eastern exotic touches that were in fashion at the time. The grand, atmospheric interior with its towering pillars, arches and stairways was testament to the great ambitions of The Wolseley Car Company. The cars were displayed on the marble floor and cost between £225 – £1,300. Unfortunately, the cars did not sell well enough and by 1926 the Company was bankrupt.

“Barclays Bank acquired the building and a new branch opened in April 1927. William Curtis Green was recalled to install managers’ offices on either side of the main entrance (now serving as a bar and salon) and a banking counter, further developing the Eastern lacquer theme. He also designed specialized furniture including a post box and stamp machine, still on display today.

“Chris Corbin and Jeremy King secured the site in July 2003 and its restoration and renovation was overseen by David Collins Architects. The Wolseley opened in November 2003.” 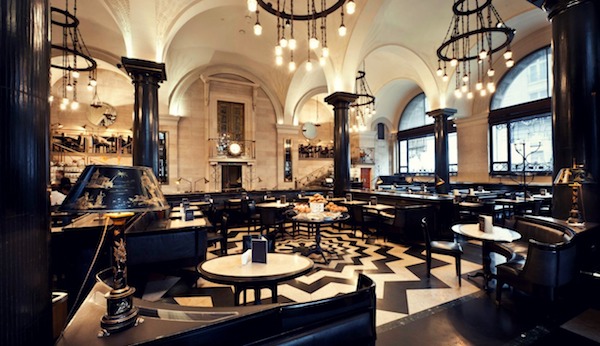 The great thing about The Wolseley is that it’s open for breakfast, lunch, afternoon tea, dinner and post-theatre supper. So you can eat there just about any time of day.

AAC had a grilled chicken, bacon and avocado sandwich served on ciabatta 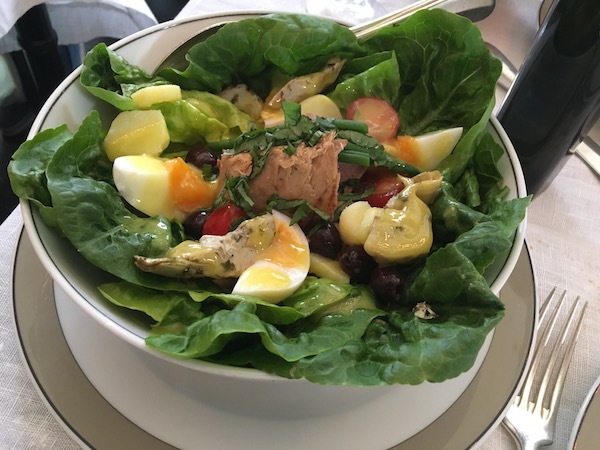 I opted for the Salade Niçoise – a very sensible choice

The food at The Wolseley is always delicious and you’re in an unusual and beautiful dining room and, should you be interested, you’re directly across the street from the world-famous Ritz Hotel.

As we finished lunch, the jet lag hit us bigly. So we decided to tube it back to the hotel and take a substantial nap. It felt SO GOOD!

We awoke refreshed and ready to get cleaned up and changed and headed out for our first theatrical adventure of the trip: the West End revival of the 1963 musical, Half A Sixpence.

On our way to the Noël Coward Theatre, we passed the Colisseum, home of ENO (the English National Opera). This fall, the company is presenting the world premiere of a new opera by Nico Muhly, Marnie. You may recognize the title from the 1960’s Hitchcock film of the same name, which starred Tippi Hedren (of The Birds fame) and the quintessential James Bond, Sean Connery. Well, ladies and gents, how lucky are we that AAC and I will be back in London for the 1st performance this coming November?

AAC looks forward to Marnie – isn’t that an amazing poster?

Half A Sixpence is based, I kid you not, on the novel, Kipps, The Story of a Simple Soul, by none other than H.G. Wells. It has been said that some plot points in the novel are autobiographical. The musical was revived by Cameron Mackintosh and created a star with the astonishing peformance of 23-year old Charlie Stemp. The actor playing the leading role of Arthur Kipps must carry the show, as he is onstage almost nonstop and is featured in no less than 15 songs. Stemp’s performance is not only accomplished – he is an amazing dancer and constantly in motion – but he’s also genuinely charming in the role and the audience adores him. The show is a constant delight and has been given a lovely and very substantial production. 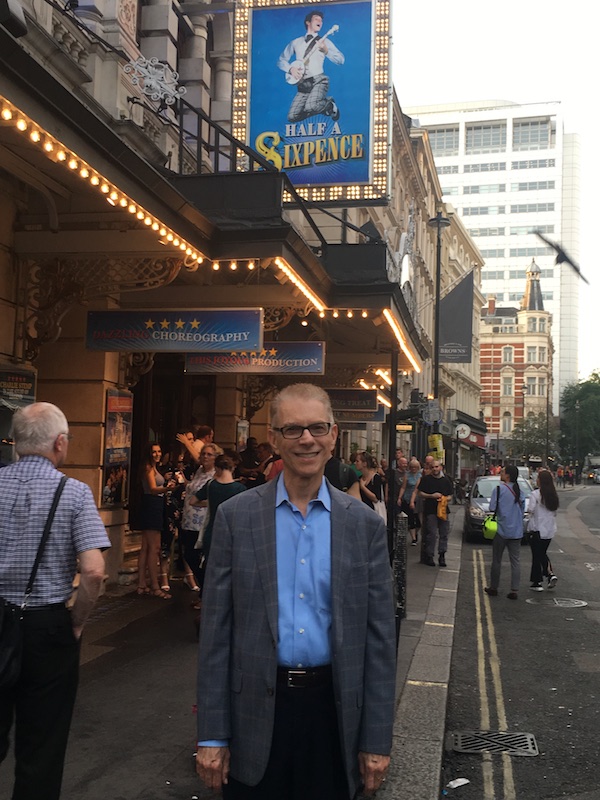 AAC arrives for his first show of the trip: Half A Sixpence

A Star is Born: Charlie Stemp onstage as Arthur Kipps in Half A Sixpence

Stemp and Company: Pick Out A Simple Tune

I only wish that I could recommend this delightful show to you as a CULTURAL TIP but, alas, the production closes this weekend. Oh well.

Following the performance, we were peckish again, and so we decided to drop in at another of our favorite culinary establishments (and one at which we dine every time we’re in town), The Ivy, which is celebrating its centenary this very year. Unusual for us, we arrived without a reservation, but we were very lucky to score a table. 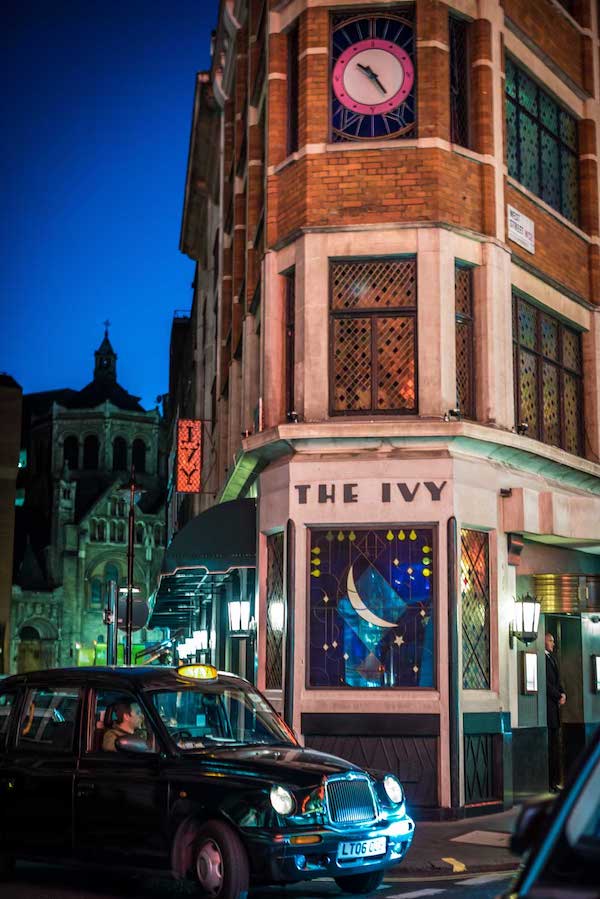 The Ivy – a great place to sup post-theatre

We had a lovely supper and The Ivy is always so friendly and welcoming.

By the time we finished, it was almost midnight and our first day in London was drawing to a close. It was time to taxi back to the Shangri-La, take some lovely pharmaceuticals and drift off into a delightful sleep with visions of what we’d done that day dancing in our heads.