Bon soir, mes amis! This will be my last entry on our holiday trip to Paris and, instead of a lot of gabbing, it’s just going to be photos taken while we were there. Some you may have seen in earlier entries but there are some new ones here, too. 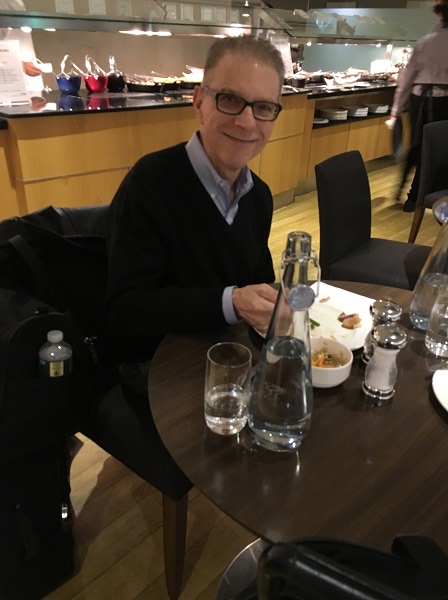 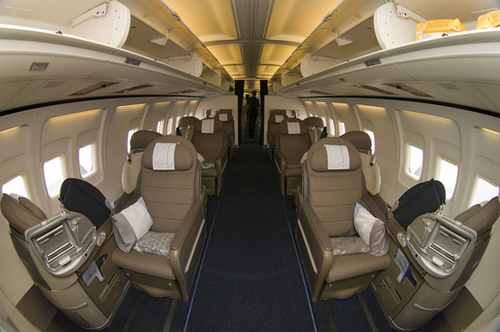 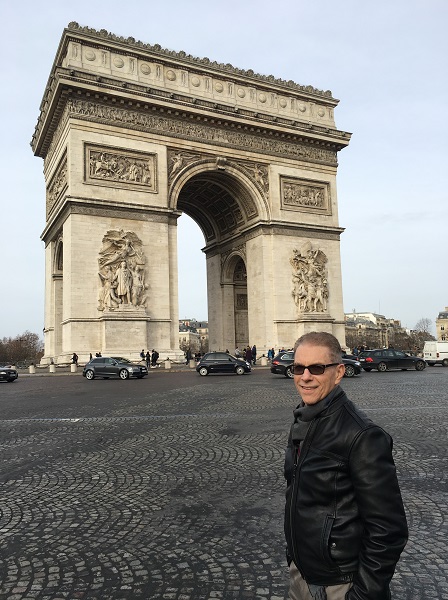 And then grabs lunch at Ladurée just down the Champs Elysses

The hotel provides us with our own stockings

Saturday evening: Negronis at Bar Kléber at the Peninsula 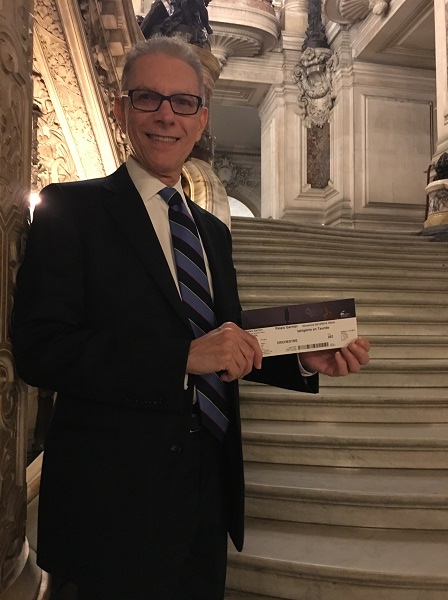 Followed by AAC, CPA at the Palais Garnier

The grand foyer and Christmas tree at the Palais Garnier

Christmas Night: the Champs Elysses all gussied up

Monday morning: Irina, of Paris Muse, shows us the Louvre

Sensational duck liver ravioli – one of their “Classics” 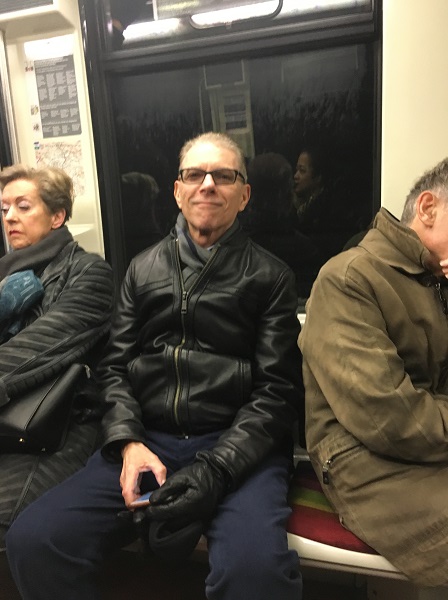 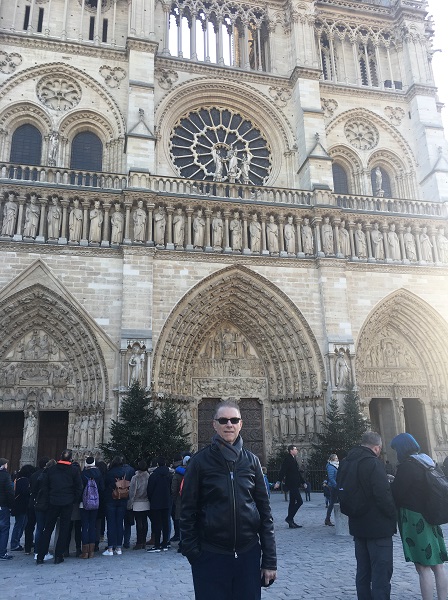 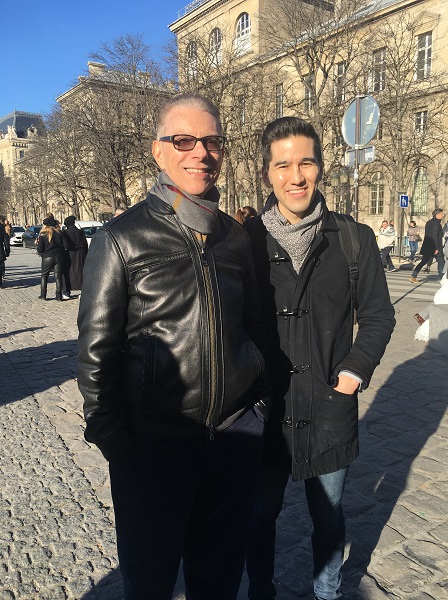 And with our terrific Paris Muse guide, Jason

View from the best tables at Monsieur Bleu

You always get pickles with your caviar – a Russian thing?

2nd course of “The Rasputin Set” – caviar with a baked potato

Famous sites on the way back to the hotel: the Madeline

Thursday afternoon: And now over to Bibliothèque nationale de France 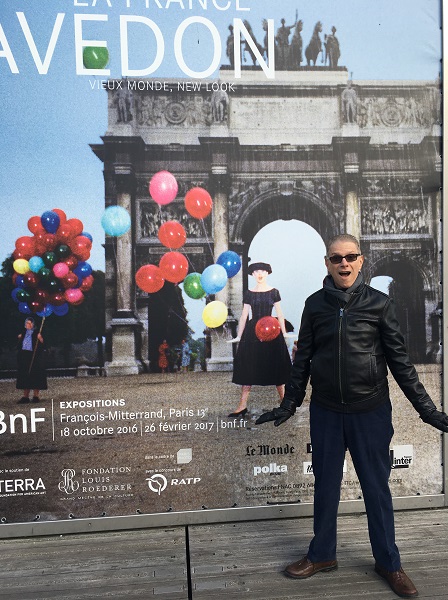 Part of the Avedon exhibit at Bibliothèque nationale de France

The view from our table at L’Oiseau Blanc

A replica of the actual L’Oiseau Blanc (The White Bird) 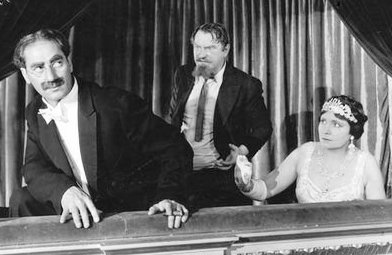 So, our Paris adventure continued last night (Christmas) when we attended an opera at the Palais Garnier – Iphigénie en Tauride, by Christoph Willibald Gluck – preceded by dinner at L’Opera, the restaurant adjacent to the historic opera house. So adjacent, in fact, that you can enter the opera house from inside the restaurant – more about that later.

It had always been intended that there would be a restaurant adjacent to the Palais Garnier. But it took almost 140 years for L’Opera to be opened in 2009. The restaurant is where the original carriage entrance was located and patrons were dropped off to attend performances. While architecturally trendy and modern, L’Opera pays respect to its renowned neighbor. Additionally, due to the fact that the Palais Garnier is a national monument, the restaurant’s structure was forbidden from touching any of the existing wall, pillars or ceiling. The cuisine under the direction of Chef Chihiro Yamazaki is modern, yet classic, with an Asian influence. The menu also features many seasonal ingredients.

We were immediately shown to a lovely table and looked over the menu, as we snacked on a delicious amuse bouche, a truffled mushroom mousse. Here’s what we had for dinner: 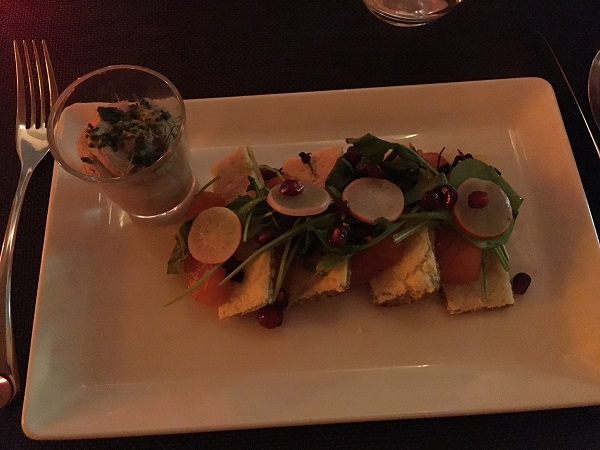 Miso-marinated black cod, kohlrabi with saffron, daikon turnip for me 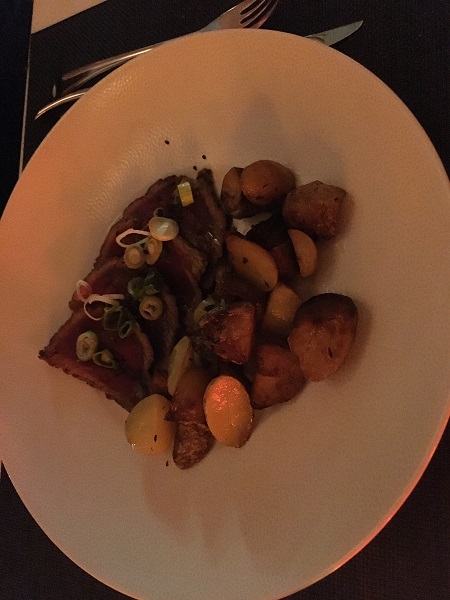 Every bite was a taste sensation, generously portioned, very fresh ingredients, beautifully prepared, as you can see.

We opted to skip dessert, as we didn’t need a sugar rush before the opera, if you know what I mean. The cost of the above, with a large bottle of Evian, was just 100 EUR which, we felt, was a bit of a bargain.

From there, we went through a black door, down a corridor and, somehow, we were inside the opera house. What’s most interesting – although I probably shouldn’t share it with you – is that we somehow ended up beyond the point at which our tickets should have been scanned for admittance. I hope that no one will take advantage of this information – you know who you are!

Although we had been inside the Palais Garnier many times – in the old days, one could wander around unattended on non-performance days – we hadn’t been inside the building in about 12 years. As we had some time before the performance, we wanted to revisit this amazing building. 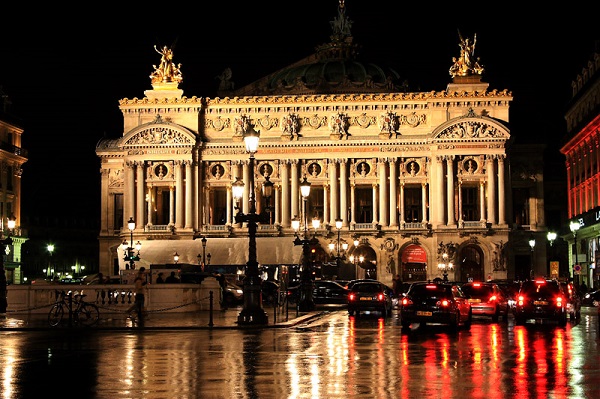 AAC, CPA somehow gets in without having to show his ticket

AAC, CPA in the grand foyer by the Christmas tree

The grand foyer and Christmas tree at the far end

The grand stairway leading to the main floor of the auditorium

We had wonderful seats on the main floor, 8th row center. 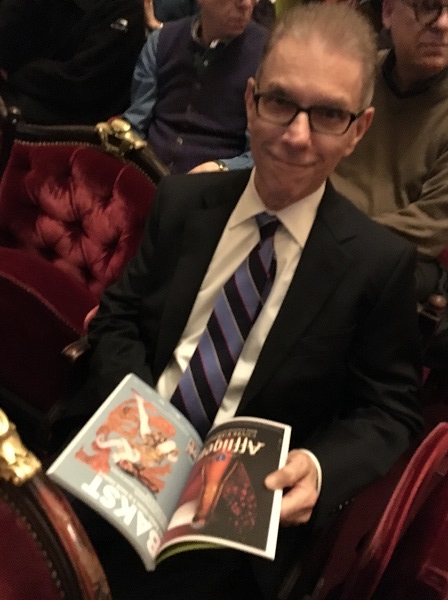 AAC, CPA seated and waiting for the show to begin

The mylar show curtain, which reflected the auditorium. 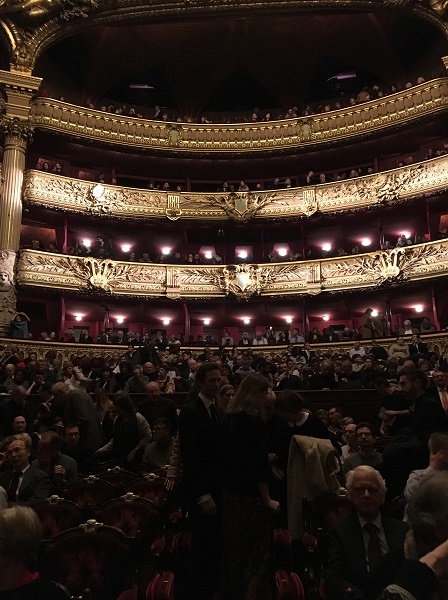 The auditorium behind where we were sitting 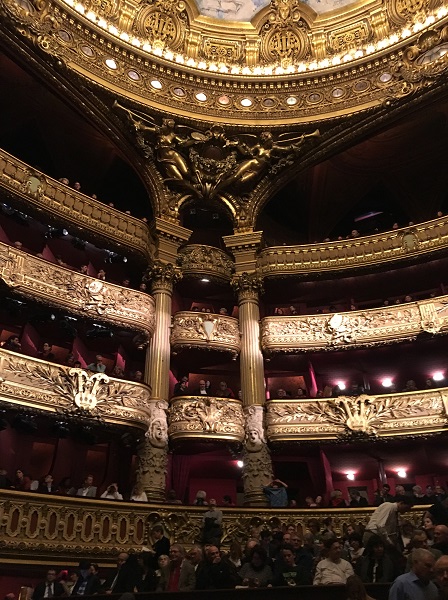 More of the auditorium

The Krzysztof Warlikowski production of Iphigénie en Tauride was a revival originally presented in 2006. It was a pretty wild affair, presented as a memory play as the now elderly Iphigénie recalls the events of the opera, which was a bit confusing if you weren’t familiar with the story, but never mind. It was very theatrical and entertaining in its unusual way. The performance was sensitively conducted by Bertrand de Billy, who we’ve previously seen at the Met in New York.

While the performance – the last of its current run – was warmly received, there were a very few unhappy attendees who felt it necessary to boo. I rarely approve of booing, but can sometimes understand it if the director and the production are so misconceived that showing displeasure should be encouraged but, in this case, it was unacceptable. I mean you don’t boo the chorus under any circumstances – they’re simply doing their job. There was no ambiguity regarding the principals, all of whom received deserved ovations.

And, so, our magical evening at the Paris Opera came to an end. We retrieved our overcoats from L’Opera and called for our Uber. Upon entering our car, we glanced over our shoulders for one last look at the Palais Garnier as we headed back home to the Peninsula.

Bon jour, mes amis! I hope that Santa was good to each and every one of you. I, myself, felt very blessed today. I woke up next to AAC, CPA and am in the beautiful city of Paris. As Ira once lyricized, who can ask for anything more?

When last I left you, we were about to prepare for our Christmas Eve festivities, starting with a cocktail downstairs at Le Bar Kléber, which was doing a brisk business when we arrived at about 7:00 PM. The barman was very talented and delivered our cocktails with great flourish and enthusiasm. 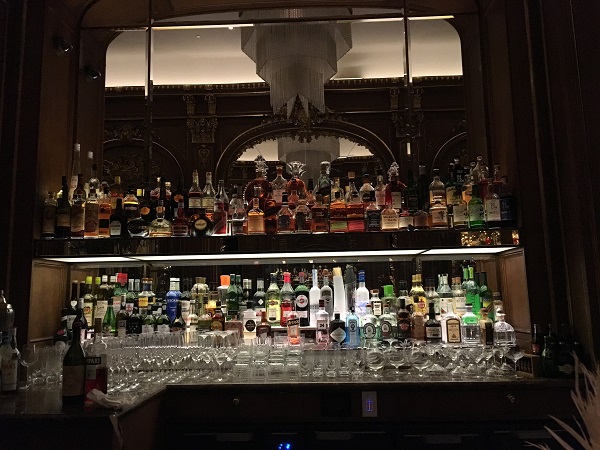 The view from our barstools

From Le Bar Kléber, we Uber’ed over to Bistro de L’Oulette, a charming restaurant on the Rue des Tournelles near the Place des Vosges. We’d eaten there a few years ago and have always wanted to return. It’s a tiny little place, probably no more than 12 tables, and has a very friendly and welcoming staff.

Once we were seated, the maitre ‘d approached with a plate of amuse bouche and offered us an aperitif, and we each opted for a glass of champagne. All were delicious.

As it was a holiday, the restaurant was featuring a 3-course pri-fixe for a very reasonable 52 EUR. The restaurant also has a delightful wine list at excellent prices and a wonderful variety of choices.

Our table was decorated for the holiday.

Four our mains, AAC CPA had medallions of monkfish with a shrimp risotto, and I had medallions of lamp with a parsley crust, accompanied by crisp sauteed potatoes and mushrooms. Both were mouth-wateringly delicious.

Oh, and did i mention that we split a split of Joseph Drouhin Aloxe-Corton 2013 which perfectly complimented our entrees. Every bite was a taste sensation. 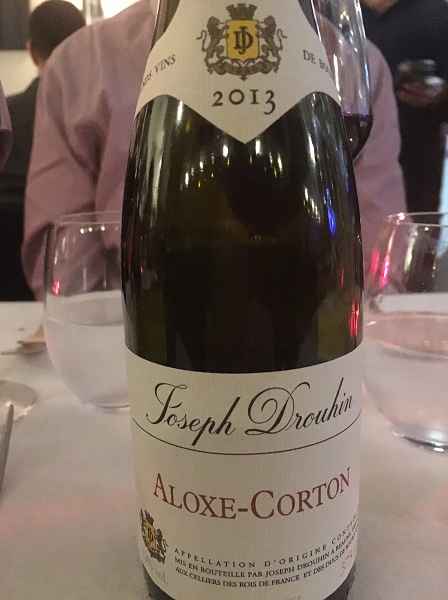 A beautiful pairing for our entrees, AAC CPA hides behind the wine.

Following dinner, it was back into the Uber and a quick return to the hotel. By that point, we were pretty tired. We struggled to stay up for awhile and finally gave up the ghost around midnight.

And then we blissfully slept for over 9 hours. It was heaven.

This morning, we went down to Le Lobby, for breakfast. It’s a beautiful room, with a beautiful staff, providing beautiful service.

The entrance to Le Lobby

AAC CPA went for the 45 EUR continental breakfast which could, in fact, feed us both. I opted for eggs and then I poached some of his goodies.

A very happy AAC CPA checking out his continental breakfast

While we were eating, we noticed that a guitarist and vocalist were setting up shop right next to our table. We were at first concerned, because we noticed the amplification that accompanied them. However, once they started to perform, it was totally delightful. Their repertoire was a combination of holiday music and American Songbook. It was a really nice touch to provide live entertainment for us.

Live music 6 feet away from us!

After breakfast, we decided to take a little constitutional, as the weather is mild today. We decided to check out the competition’s holiday decorations at the nearby Four Seasons Hotel George V. We’ve stayed there on occasion and have always been wowed by the floral arrangements in their lobby. Here’s what we saw today:

Meanwhile, out in their courtyard:

‘Tis the season to be jolly, indeed!

And now, it’s time to great ready, once again, to prepare for our 2nd evening out in this enchanted city. The bill of fare: dinner at L’Opera, the restaurant adjacent to the historic Palais Garnier, home of the Paris Opera, where we have tickets to see Iphigénie en Tauride.