For those of you in New York who have time between now and Saturday, November 7th, you have 4 chances remaining to see The Representatives’ production of Veritas, by Stan Richardson, co-directed and co-produced by Richardson and Matt Steiner (who is also a member of the cast). I cannot recommend this production highly enough.

Veritas deals with a shameful witch-hunt that occurred at Harvard University almost 100 years ago and destroyed the lives of a dozen students. The play was originally performed at the 2010 New York International Fringe Festival, where it had the distinction of being the first Fringe production to sell out before it even opened.

The incident came to light only in 2002, when a researcher from the university’s undergraduate newspaper, The Crimson, discovered a box of files labeled “Secret Court”. The paper’s staff subsequently had to battle the university’s administration to make public the over 500 documents relating to the Court’s proceeding. Finally, on November 21, 2002 the Crimson published an article entitled Fifteen Minutes, which made public this shameful piece of history.

Attending a Representatives production is a unique event in itself. When we arrived at the Omsted Salon (a series of rooms at Calvary/St. George’s Church near Union Square), instead of tickets we were handed something akin to a baseball card with a photograph of one of the actors with his character’s name on it. We were told that he would eventually seat us in the first of two performance spaces in which the play would unfold. We were then invited to lubricate ourselves with our choice of complimentary wine or water. 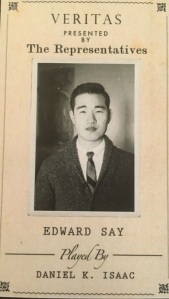 Our entry card into the performance

As we approached the beginning of the performance, “Edward Say” arrived to escort us to our seats. Along the way, he explained the mise en scene and told us a little bit about his character. And then he refilled our wine glasses! Thanks, Mr. Say.

The space for the first act was a long narrow room seating probably no more than 100 spectators, and probably a bit fewer. The staging took place in and all around us. You felt as if you were in the middle of the action.

At the conclusion of the first act, a 10-minute intermission was called and we were asked to move back into the space where we had started for more wine. It was there that the play resumed. Midway through the second act, we were directed back into the other room, which had been reconfigured and where we saw the remainder of the play.

Following the performance, we were invited to attend the “after-party”, so that we could hang out and mingle both with the audience and with the cast.

Since 2012, The Representatives has presented over a dozen new works, in site specific settings, many of which take place in apartments (yes, friends of the company “host” productions in their apartments!) to the Olmsted Salon, where we attended last night’s performance.

In their own words, “The Representatives’ dedication to presenting work as soon as it’s written – in people’s homes and other unconventional spaces – has created an underground following committed to hyper-intimate theatrical experiences. Committed to creating a community as much as making art, every performance of ours’ is followed by a party, creating a unique space for our increasingly diverse community to engage in enjoyable (if sometimes uncomfortable) conversations they might not find in their day-to-day lives.”

Tickets are priced at $20 and wine and the after-party is included. Get there if you can – you won’t regret it.