From the uRbaN Dictionary:

“1. Any woman who has a deep fascination with the wonderful, beautiful, talented English stage and on-screen actor Benedict Cumberbatch.
“2. A reference given to people who admire the beautiful features of Benedict Cumberbatch. Ex- his green eyes, beautiful cheekbones, sexy tousled hair.
“3. Can be proper ladies, or “dirty ladies” and everyone in between.”

Well, I guess that just about says it all, huh?

I mention Cumberbitches today, because they will be out in force tonight for the National Theatre Live’s international broadcast of the Bard’s Hamlet from the stage of the Barbicon in London, starring you-know-who in the title role. When this production was announced in 2014, tickets sold so quickly that, if you blinked, you missed out. This is what’s known as “an event”, probably with a capital “E”. We all know about them – celebrity actor comes to town to star in a play for a limited amount of time. General huzzahs and, perhaps, some grumpy comments abound, but still the show sells out in record time and a lot of money is made for a lot of people.

Does Mr. Cumberbatch have the goods to deliver a performance for the ages? Or are we placing unreasonable expectations on him that cannot possibly be met? 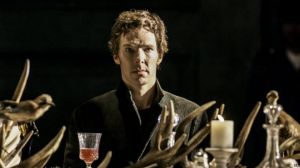 What did the critics have to say about him (and the production) that officially opened in August? And were you aware that some pervy press critics – you know who you are: The Times and Daily Mail reviewers!!! – showed up at the first public performance to have their say? Not fair, I protest!

But what about the critics who attended the “first night”? Here’s a quick compendium of reviews:

If you want to make up your own mind and attend the broadcast, check out the ticket situation and let us know what you think.

See It For Yourself!

AAC CPA and I will be at a theatre in New York City tonight to see it and “him” for ourselves. And, yes, we bought our tickets months ago.

Uh-oh: Does that make us Cumberbitches?