Yesterday afternoon, AAC CPA and I had what was the last lunch served at the fabled Four Seasons Restaurant in the Seagram Building in New York City. (More about that later.) Tonight at around midnight, the restaurant will close forever. Since its historic opening in 1959, the Four Seasons has, arguably, been the most famous restaurant in the world.

My history with the establishment goes back over 40 years, when I first arrived in New York City, having just completed university in California. I was introduced to the Four Seasons in the fall of 1974, when I was taken by a mentor/friend of mine, Bill Konkoy, whose responsibility it was to show me the sights. We reserved a table in the Pool Room and it is impossible not to be impressed by the walk from the reception/bar area, down that long corridor, past the Picasso “Le Tricorne” tapestry (recently removed in an acrimonious dispute between the owner of the Seagram Building and Alex von Bidder and Julian Niccolini, the owners of the restaurant) and, finally, into the Pool Room. What a thrill!

It had been Bill’s intention that we would order off the pre-theatre prix fixe menu but, after glancing at the a la carte menu for a moment, he took a “what-the-hell” attitude and we ordered as we liked. By today’s standards the meal was inexpensive but, back then, we spent beaucoup bucks – money very well spent.

For those of you who may be unfamiliar with the place, it was perhaps the first “total concept” restaurant. Designed by architects Philip Johnson and Mies van der Rohe at a cost of over a then unprecedented $4,000,000, the restaurant immediately became the anchor of the brand new Seagram Building, located at Park Avenue and 52nd Street. In the beginning, the space was intended to be a bank or, perhaps, a car dealership. Fortunately, those plans never materialized and, instead, a great restaurant was born.

Aside from the up-to-the-minute architecture, which has never lost its luster and has, in fact, been landmarked, every piece of furniture, chairs, tables, banquettes and more, every piece of crystal and flatware, the chargers at each seat, was designed for that space. It was all perfectly integrated. And more: owing to its name, there were subtle changes of décor for each season, and certain menu items would be swapped out as well.

The bar with the fabulous bronze sculpture by Richard Lippold

I’ve accumulated a lifetime of memories at the place:

To celebrate our 1st anniversary, AAC CPA and I dined there together for the first time. It was a magical night.

When, 9 years later, we were deciding what to do for our 10th anniversary, there was no better place to celebrate than at the Four Seasons. We worked with then manager, the indispensable Julian, who effortlessly stewarded us through the planning stages. For those of you familiar with the restaurant, we took the adjoining private rooms on the mezzanine level behind the Grill Room – the smaller room for cocktails and the larger room for a sit-down dinner for 20. The night arrived and AAC CPA and I were greetings our guests when the late Mike Wallace (of 60 Minutes fame) arrived, strode right over to the bar and ordered a dry martini. AAC CPA and I exchanged a nonplussed glance and I decided to go over to introduce myself. Mr. Wallace looked a bit startled and quickly realized that he had crashed our party. He was there that evening because Eric Sevareid (the famed CBS journalist and elite war correspondent) had retired that day and was guest of honor at a party in another part of the restaurant. Mike looked around with a kind of “oops” expression on his slightly bemused/embarrassed face, murmured “I guess I’m at the wrong party”, and made a hasty exit. Our party, by the way, was a complete success, our famous uninvited guest notwithstanding.

Our 10th anniversary party at the Four Seasons

The number of family celebrations are too numerous to count: family and friend’s birthdays, anniversaries, holidays or just stepping out for a night on the town.

AAC CPA and I hosted his late brother, Paul, and his wife, Ann, on the occasion of their 40th anniversary. The Four Seasons always sent over made-to-order cotton candy whenever a special occasion was being celebrated. Ann wasn’t crazy for it, but appreciated the gesture.

Speaking of which: We took AAC CPA’s great niece and nephew, Sloane and Tyler, to a cooking class a few years ago, after which we all sat together at a very long table in the Grill Room and ate what had been prepared during the class. Sloane and Tyler had made quite an impression on the kitchen staff and they were taken back after lunch to play with the cotton candy machine.

And then there were the New Year’s Eve lunches. Quite frankly, AAC CPA and I have always felt that New Year’s Eve is highly overrated, especially in New York where the price of everything seems to triple on that night and don’t get me started on trying to find a cab. So a long time ago, AAC and I decided that the civilized thing to do was to have a wonderful lunch at the Four Seasons, come home, and let the amateurs take over.

We were there this past December for our last Four Seasons’ New Year’s Eve lunch. Our favorite waiter, Giuseppe, took such good care of us. In fact, he spoiled us rotten that day. Mille grazie, Giuseppe.

All of which brings us to our last lunch yesterday afternoon. We had decided on a whim that we needed to eat there one last time. I was able to secure a table in the Grill Room (which was where the “Power Lunch” came into existence), and so we climbed the steps to the 2nd floor one last time. Julian was there to greet us – “Welcome back” – and we were escorted to a lovely table.

The atmosphere was slightly surreal and somewhat frenzied. There were several paparazzi moving around the room taking lots of pictures. At one point, a table had to be brought out and set up for a last minute arrival: Charlotte Hunt, travel manager at Blackstone, accompanied by Jay Cheshes, who posted a column of this last lunch for The Daily Beast.

There was a bit of levity when we asked for a couple of Negronis (our favorite and the best cocktail ever) straight up and very well chilled. Our server said that she hoped there was still some gin left in the restaurant. (WHAT?) When the drinks arrived a few minutes later, they looked positively warm, were served in a white wine glass and there was a marsichino cherry in the bottom of the glass. That was one of the oddest things ever. Our server was mortified and had to explain that: 1) she couldn’t find any martini glasses; 2) she couldn’t believe that she had put a cherry in the glass; 3) she had, on many occasions, served that very cocktail to Philip Johnson (sans cherry, of course). Apparently the closing of the Four Seasons was affecting the staff in strange ways.

We asked her to replace the Negronis with a couple of Campari and sodas, which turned out to be fine.

About those missing martini glasses: our waiter explained that, over the past few weeks, diners had been leaving the restaurant with mementos of the place; in other words, they were stealing the restaurant blind. It was obvious to us, as their signature bread baskets, salt and pepper shakers, and more, were nowhere to be found. Seriously, people!!

Julian was working the room, as always, and at one point, was wearing a Four Seasons construction hat (a new location for the Four Seasons has been chosen, just a few blocks away, and will open in late 2017 or early 2018). We enjoyed observing all the antics in the room, the table-hopping, the paparazzi. It was simultaneously fun and a not a little bit wistful. 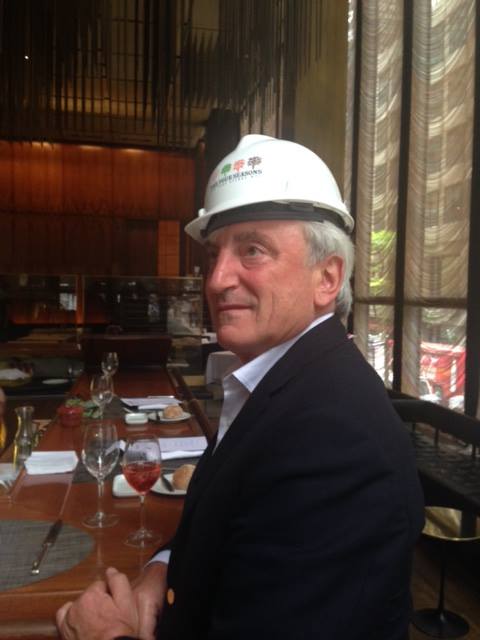 After enjoying our replacement cocktails, we ordered a lovely lunch: Crisp Shrimp with a stone-fruit mustard and an Ahi Burger with Mango Salsa and fries for me; Artichoke Salad with Burrata and Maryland Crab Cakes (a signature dish) for AAC CPA, all of which we enjoyed very much. 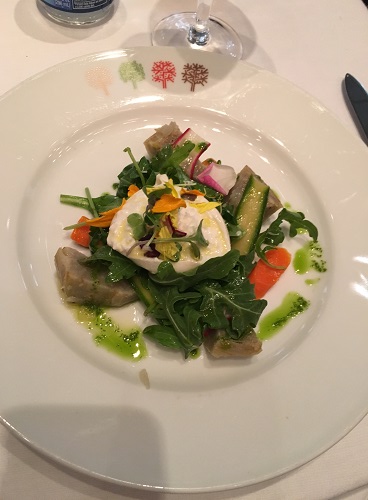 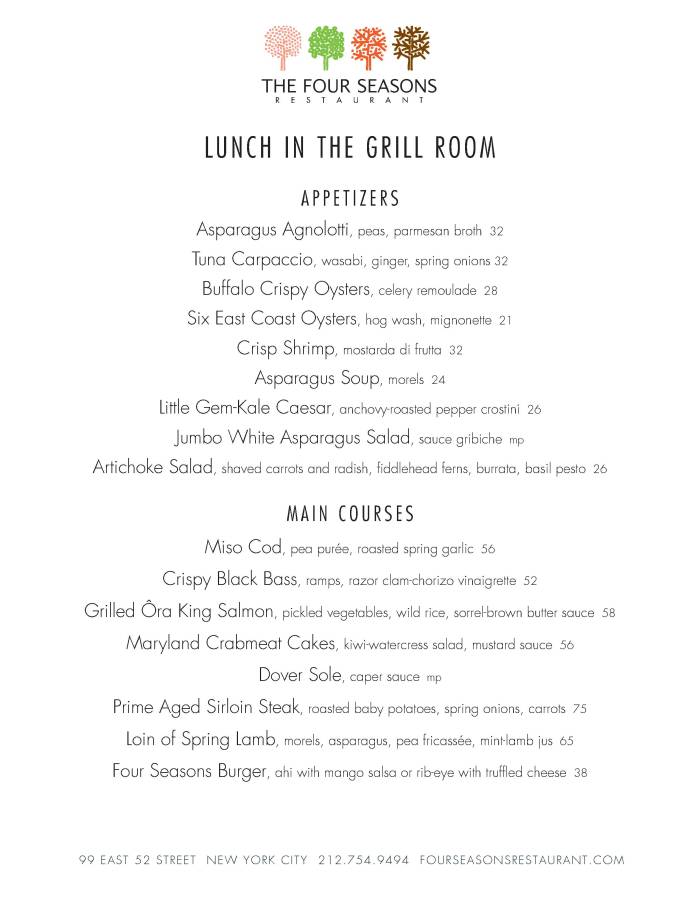 All good things come to an end and we settled our bill, thanked our waiters, and said “au revoir” to Julian. But we had one last thing to do.

We took a final stroll from the Grill Room, down that corridor (now naked and a bit forlorn without “Le Tricorne” on display) and went into the Pool Room. Of course, the first person we ran into was Giuseppe. We thanked him for taking such good care of us over the years, took a last look around and that, as they say, was that.

And, so, a great institution is shutting its doors for good. I could bitch about the circumstances that forced the restaurant to close (a multiyear dispute initiated by the owner of the Seagram Building), but that won’t change anything.

If all goes according to plan, a new Four Seasons will open in about 18 months. I have mixed emotions. Nothing can compare with dining in this iconic space. On the other hand, Julian, Alex and their staff have forged many wonderful relationships with their diners over the decades and that’s what will remain.

In the meantime, I’ll just say thanks for the memories.

PS. For better or worse (there are arguments to be made on both sides), all of the non-architectural elements will be sold at a private auction on Tuesday, July 26th at the restaurant. The highest bidders will come away with furniture designed by Philip Johnson and Mies van der Rohe, serving dishes (and more) designed by Ada Louise Huxtable, even the Four Seasons illuminated signs from the entrance will be on the block. A set of four Four Seasons ashtrays (one for each season) is estimated go for between $500-700 or a dozen custom water glasses from $300-500! I’ve already registered (and have an assigned paddle number, if you please) and hope to come away with some memento of our many years at the Four Seasons. Stay tuned and we’ll see what happens.

One thought on “End of An Era: The Four Seasons Shutters”