There are many astonishing and multi-Michelin starred restaurants at which one may dine in Paris – Taillevant, Guy Savoy, Arpege, Tour D’Argent, Le Cinq and a few others  – but there is one that, for us, tops them all: Le Grand Véfour.

Taken from a brochure that this restaurant places on each table:

“In 1784, with development work at the Palais-Royal complete, Mr. Aubertot, a café-owner by trade, opened the fashionable Café de Chartres on the site currently occupied by Le Grand Véfour. This hotbed of political chatter soon became the place to be seen, as the Palais-Royal was the ideological center of the movement that led to the French Revolution on 1789.

“During the Revolution, the Café de Chartres became a luxurious restaurant and future headquarters for the post-Jacobin extremists who came to power in July, 1794. Napoléon Bonaparte and Joséphine dined there. 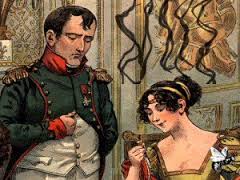 “The reputation of Café de Chartres reached its zenith during the Restoration, with the arrival of Jean Véfour, who gave his name to the café and oversaw its transformation into a sumptuous restaurant that had all of fashionable Paris clamoring to get into.

“On February 25, 1830, Victor Hugo and his friends dined at Le Grand Véfour to celebrate the opening night of “The Battle of Hernani”, one of the poet’s plays being staged for the first time at the Comédie Francaise.

“During the Belle Époque, the elite rubbed shoulders with the demimonde at Le Grand Véfour, where La Belle Otéro pirouetted on the pink marble tables under the adoring gaze of her royal lovers.

“Between 1914 – 1945, the restaurant faded from the limelight. After the Liberation of Paris in 1945, the owner of Maxim’s, Louis Vaudable, purchased Le Grand Véfour and handed it on, in 1948, to Raymond Oliver who reigned there for 36 years and restored the restaurant to its former splendor. Colette and Jean Cocteau made the establishment their restaurant of choice and celebrities from the world of art and literature streamed into Le Grand Véfour including Jean-Paul Sartre and Simone de Beauvoir.

“Jean Taittinger acquired this temple of French gastronomy from Raymond Oliver in 1984 and, after a meticulous renovation, restored the luminous decoration.

“Today, Guy Martin has taken on the task of reversing the ravages of time to fully restore Le Grand Véfour – an establishment that has been at the epicenter of Parisian life for over two hundred years.”

On Monday evening, AAC and I dined at Le Grand Véfour – for the 4th time. It is the only restaurant in Paris at which we have eaten more than twice. It’s a culinary and sensory experience that deserves to be repeated.

The first thing you notice upon entering the restaurant is the jewel-box splendor of the dining room, the sense of history, and the adventure upon which you are about to embark. The service, from the maitre ‘d who escorts you to your table to the men and women who serve you, is understated, classy, casually correct and almost invisible. It all just somehow happens.

The dining room as seen from the entrance. Our banquette is at the upper right corner.

You are already aware of some of the luminaries who have dined there over the past two centuries. Some of them have been honored by having banquettes named for them: Napoleon, Joséphine, Jean-Paul Sartre, and Colette, at whose banquette we have sat each of the 4 times we have dined at Le Grand Véfour.

Colette’s plaque at our banquette. 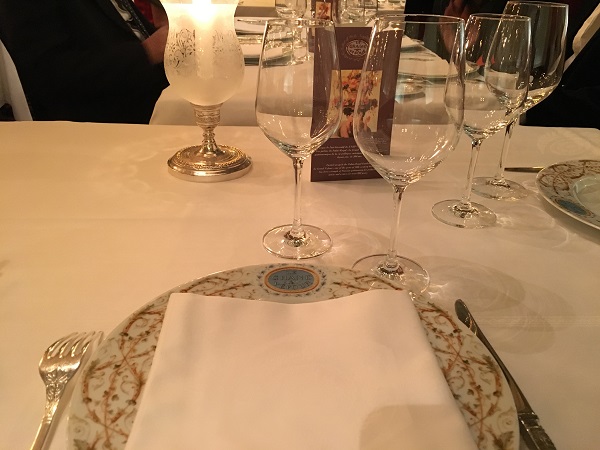 Once seated, we were offered an aperitif to enjoy while perusing the menu, and it seemed appropriate to commence our evening with a glass of Ruinart Rose Champagne. 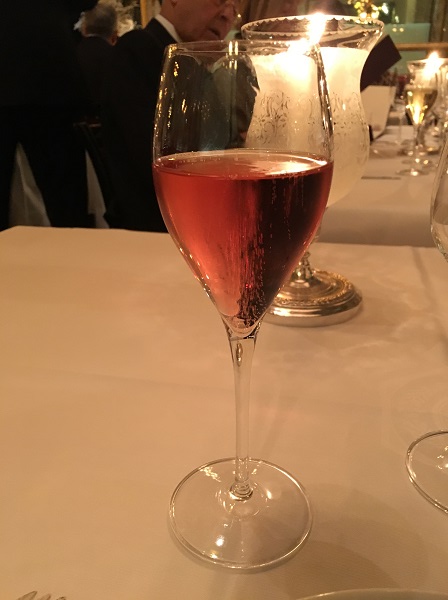 Whetting the appetite, as it were.

The menu, while not large, is extremely diverse and offers a mouth-watering selection of entrees and plats.

In addition to the current menu, there are a few “all-star” choices, referred to as the “classics”. One of our faves is the duck liver ravioli with truffle emulsion cream: exquisitely thin and delicate dumplings filled with the tenderest duck liver and topped with a light truffle cream. It’s not unlike popping a little heaven into your mouth. 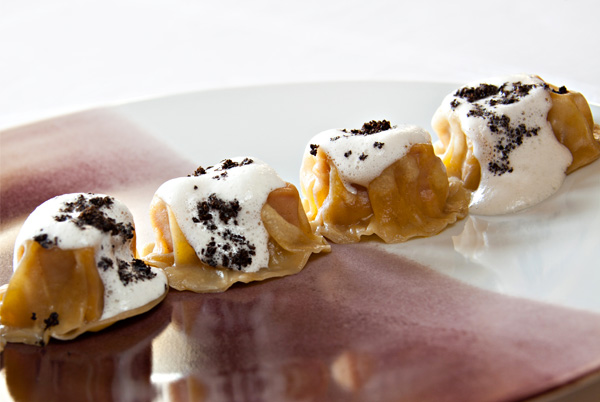 To accompany the ravioli, our sommelier recommended a split of Blagny Meursault 2011 produced by Louis Latour, which beautifully supported the delicacy of the pasta and the bite of the duck liver.

I love the white Burgundies!

To follow the ravioli, AAC, CPA and I went our own and separate ways: he to have the braised filet of sole with crunchy skin, which was beautifully and lovingly prepared to maintain the delicacy of the fish, and I to have the filet of lamb with parsley root in fine puree, accompanied by butternut gnocchi, with Jamaican pepper juice which was, to put it mildly, a taste sensation, verging on sensory overload. Each of our plats were accompanied by a potato puree au jus – creamy, buttery, and substantial. 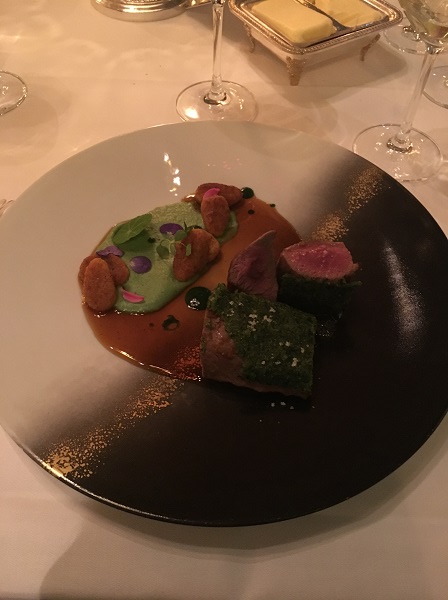 And my lamb with butternut gnocchi

For this course, we switched to a Chateau Peyrat Fourthon 2008, which was a delicious counterpart to both the sole and the lamb.

Our red for the evening

While we were taking a break after our plats, we stopped to appreciate, yet again, the beautiful dining room:

It truly is like being inside a beautiful jewel box.

Although we had each ordered a dessert, Le Grand Véfour must have a true sugar addiction, because desserts here are served as a multi-course affair. First came a duet of a block of dark chocolate and a cauliflower mousse (I’m not kidding): 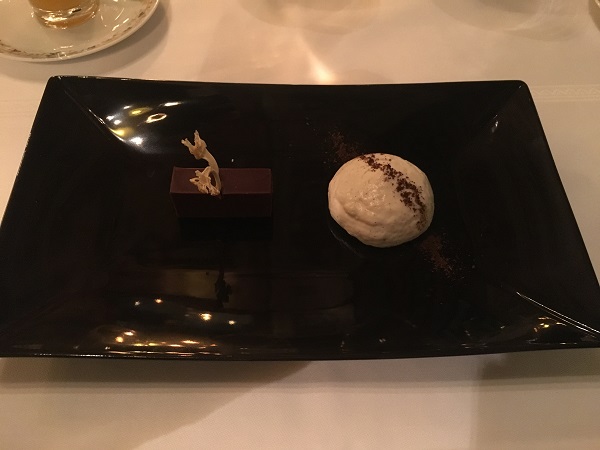 These were accompanied by plates of petits-four for each of us:

A little something to accompany our chocolate and our cauliflower mousse

Oh, and there was a multi-layer citrus-type cream with a meringue topping that showed up as well:

Also presented at this point were delicious and very fresh grape and orange gelatin candies: 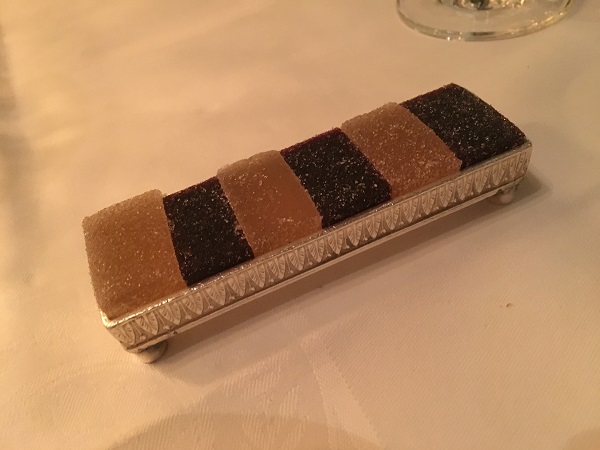 So sweet and fresh

At this point, I want you to understand that we hadn’t yet received the desserts that we had actually ordered!!

At one of our earlier visits to Le Grand Véfour, we were astonished and delighted to discover that one of the dessert options was an artichoke crème brûlée, with candied vegetables and a bitter almond sherbet. Fortunately, that’s still one of Guy Martin’s classic creations and it was, once again, on the menu:

AAC, CPA chose another classics – the Cube “Manjari”, with orange pepper infusion, which I must share with you in the following photographs: 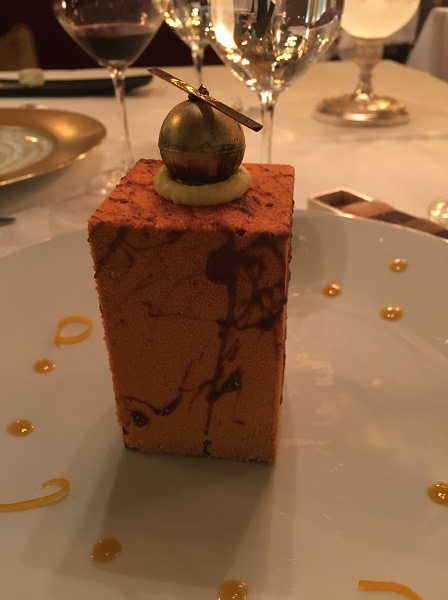 The Cube “Manjari”, as presented

Peeking inside the cube

The cube reveals all of the goodies inside.

You’d think that would be it, right? Not quite so fast, please.

Once these amazing desserts had been consumed, our waiter is back, first with a large platter bearing a variety of chocolate truffles and fresh caramels (you may have as many as you like) and, also, with the traditional yellow angel food cake, which concludes every meal at Le Grand Véfour:

You would think that you’d be ready to explode at this point but, in reality, we were beautifully satisfied. Our three-hour dining experience had come to an end, but the evening was a combination of great food and great theatre, memorably served up for our culinary pleasure.

Your final thought is that, one day, you will return again to sample the magic that is Le Grand Véfour.

A last peek from the sidewalk

And, speaking of magic, here’s a last image from our Uber ride back to the hotel as we raced past Place Concorde: